Old World Wonders discover and offer the earliest medal known to have been made in Germany. The gallerists of Old World Wonders acquired the “anonymous” medal in a recent sale where it was misidentified as Italian.  The origin of medals began in Italy during the 1430s and while Italian medals were known in Germany during the mid-15th century the earliest production of medals in Germany did not catch-on until the 1510s with the sculptor, Hans Schwarz, who adopted and specialized in the medium in Augsburg.  Prior to Schwarz, the brass founders of the Vischer family in Nuremberg experimented with the production of medals. This early experimentation with the medal in Germany is known by only four surviving objects: two surviving casts depicting a portrait of Hermann Vischer the Younger, dated 1507; a singly known self-portrait medal of Peter Vischer the Younger, dated 1509; and a singly known portrait medal again of Herman Vischer the Younger, dated 1511.

The gallery’s discovery a fifth early German medal establishes it as the earliest example produced in Germany, dated 1490, and reproducing the effigy of Margaretha Vischer, the wife of Peter Vischer the Elder (father of Peter the Younger and Hermann).  Scholars had placed Margaretha’s death in 1490 or 1491 and the inscription on the medal confirms her date of death on the 17th of January or June in 1490.

In addition to the discovery, the medal may also be considered one of the earliest datable and confirmed works by Peter Vischer the Elder, who became recognized by his guild as a master in 1489.  Vischer is celebrated as the most important metal-sculptor of Germany, helping to transition the Gothic style into the new style of the burgeoning Renaissance.

A complete analysis and survey of the medal is available online at:

Old World Wonders have also possibly identified the first-known wood sculpture by Pietro Torrigiani: a near life-size statue of St. Anthony. Torrigiani is best known for famously breaking Michelangelo’s nose in a fist-fight during their youth while taunting one another’s capabilities in art. Torrigiani’s other claim-to-fame is the role he played in successfully spreading the Italian Renaissance style outside of Italy, with activity in France, the Netherlands, England, Spain and possibly Portugal.  His most famous work is the bronze tomb of King Henry VII and his wife in England. Torrigiani is considered one of the most important sculptors of the Renaissance and the gallery’s discovery awaits confirmation from other experts.  In the interim, a presentation on the sculpture is available online:

Lastly, the gallery has also identified the subject of one of the oldest fountains in Nuremberg, a Renaissance era bronze depicting a man holding two plump geese, called the “Geeseman Fountain.” Local tradition believes the fountain represents a drunk beggar who wandered into the city to sell his geese at the market, but having a change-of-heart, kept them as pets and returned home. As a result, the figure of the statue has been reproduced on numerous beer steins for the past century and two additional later copies of the fountain exist within the city.  The fountain remains a cultural landmark and popular tourist attraction. The subject of the fountain is the Renaissance Reformer Philip Melanchthon who helped to establish the city’s first public education system following the city’s adoption of Protestantism in 1525. The geese he holds represent the current and future students of Nuremberg, as outlined in our analysis of the subject:  https://renbronze.com/2020/05/30/the-identity-of-nurembergs-gansemannchenbrunnen-or-geeseman-fountain/

Old World Wonders launches their annual catalog(s) of fine works-of-art and antiques. The catalogs are divided into two presentations, the first dealing with works in wood, stone and terracotta and the second dealing with works in metal and precious objects. The later catalog, in particular, offers unique academic findings regarding the subject of Renaissance plaquettes and paxes, an area of specialty for the gallery.

Included are rare Northern works by the Austrian Baroque sculptor Johann Franz Schwanthaler, the German Renaissane sculptor Hans Zürn the Elder, a group of possible putto by the master Ulmish carver Gregor Erhart and a unique gilt brass wine flask possibly by Peter Flötner. Italian works include unique and rare paxes by Antonio Gentili da Faenza and Sebastiano Torrigiani (both from the school of Guglielmo della Porta) and a scarce bronze relief from the circle of Donatello (possibly by Bertoldo di Giovanni). A scarce painted crystal miniature attributed to Giovanni Giacomo da Decio is also featured along with an autograph Limoges enamel by Pierre Reymond of France.

The catalogs may respectively be viewed or downloaded here: 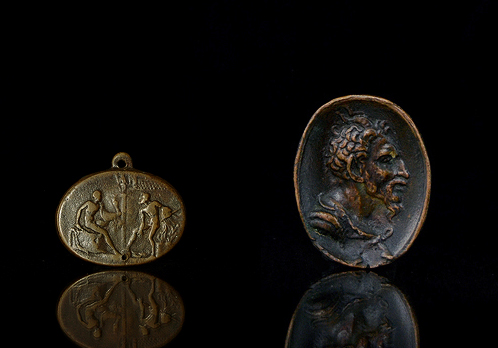 In honor of the publication of Jeremy Warren’s magisterial catalogs of the Ashmolean Museum’s sculpture collection (Vol. 3 dedicated exclusively to the subject of plaquettes), the gallerists of Old World Wonders donate two additional plaquettes to the museum’s collection: a relief of Ulysses, Diomede and the Palladium and a relief featuring a Head of Pan.

The donation of the Ulysses, Diomede and the Palladium plaquette is of particular importance due to its scarcity and also because the museum owns the original sardonyx intaglio from which it was cast.  The gem is of Roman origin dating to the 1st century AD and features a Greek inscription, ΦΗΛΙΞ ΕΠΟΙΕΙ ΚΑΛΠΟΥΡΝΙΟΥ ΣΕΟΥΕΡΟΥ, revealing its antique creator and original owner: a Greek artist named Felix, active in Rome, and the gem’s commissioner, Calpurnius Severus. It is this reference to the engraver’s name that has inspired the gem’s popular identity as the Gemma Felix or “Felix Gem.” Its scene depicts Diomedes escaping from Troy with the stolen statue of Athena while greeted by Odysseus who has recently slain a Trojan guard or priest, indicated only by the presence of the maimed guard’s feet beneath him.

During the Renaissance the gem was probably owned by Ludovico Trevisan, an important collector of antiquities who had probably acquired it from the estate of Niccolo Niccoli in 1437. Sometime after 1451 another collector, Pietro Barbo (the future Pope Paul II), must have acquired the Felix Gem from Trevisan. It appears in Barbo’s 1457 inventory, prized as the most valuable gem in his collection. Following Barbo’s death in 1471, the gem was acquired by Cardinal Francesco Gonzaga whose posthumous inventory likewise records it in 1483. During the first half of the 17th century the valuable Mantuan collections of the Gonzaga were sold off predominately to English royalty. King Charles I was offered the collection of Mantuan gems but perceived their price as too high. They were instead acquired by Lord Arundel (Thomas Howard). After a series of later transactions following Lord Arundel’s death, the gem eventually arrived in the Duke of Marlborough’s (George Spencer’s) collection and today resides at the Ashmolean Museum in Oxford, UK (Inv. AN 1966.19081).

The origin of the six known plaquette casts of the Felix Gem, inclusive of the present example, probably derive from the private foundry established by Barbo at the Palace of San Marco (Palazzo Venezia) in Rome where his efforts at renovating the structure began in 1455. It has been suggested that Barbo himself may have been responsible for the casts of the Felix Gem given their amateur casting quality. Barbo’s zealous love for the reproduction of antique glyptics in bronze makes the idea a possibility, himself being a major catalyst for the popularity of small bronze reliefs in the early Italian Renaissance.

Before the gallery’s acquisition of the plaquette it formerly belonged to the illustrious collection Sylvia Adams and before her, to the famous 19th century Italian art dealer, Stefano Bardini.

The Head of Pan plaquette is donated in-mind to replace a rather diminished cast already in the Ashmolean collections. The gallerists of Old World Wonders were responsible for an in-depth study on the plaquette, rediscovering the original Renaissance rock crystal from which it derived and discussing the complex history of the relief whose meaning altered over time and whose effigy was also once sketched by a young Michelangelo in Florence.  The complete study can be found here:

Old World Wonders begins a partnership with the premiere web portal, Antic Store in France, an online conglomerate of the world’s finest dealers of high-end works-of-art, furniture, painting, sculpture and jewelry. Headquartered in Paris, France, AnticStore bring the quest for excellence online for serious collectors around the world.

The gallery’s profile can be viewed here: 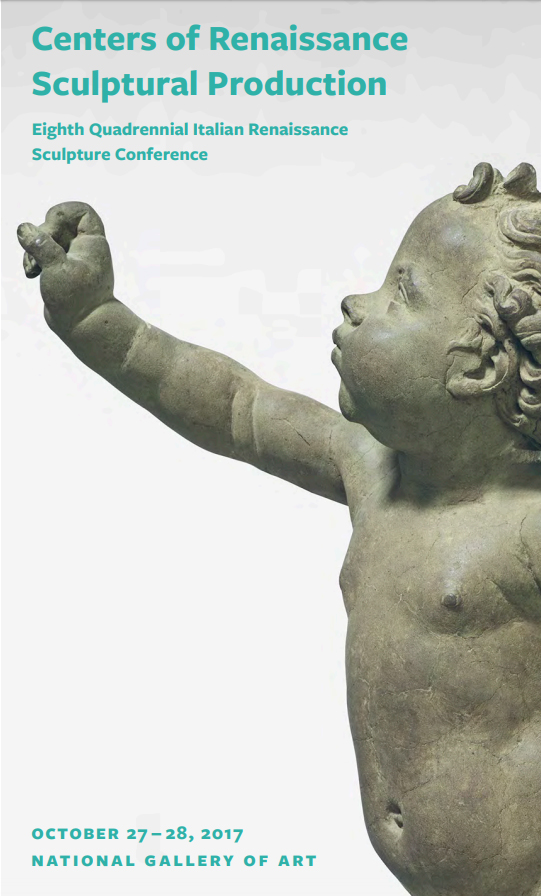 Old World Wonders proudly provided support for the Centers of Renaissance Sculptural Production Eighth Quadrennial Italian Renaissance Sculpture Conference hosted at the National Gallery of Art between October 27-28.  The conference was co-sponsored by the Edith O’Donnell Institute of Art History and University of Texas at Dallas with papers presented by a multitude of global experts in the genre. The full program and list of presented papers can be found online at:

Saddened by the loss of their friend, Eleonora Luciano, the gallerists of Old World Wonders donate a finely cast bronze plaquette of the Adoration of the Shepherds by Valerio Belli, in celebration of her memory.  On various occasions, Eleonora would open the gallery’s store room of Renaissance plaquettes and medals, as well as her home to discuss and share her wisdom, expertise and friendship. Her passion for the Renaissance was more than work, but rather a sincere pleasure expressed in all the projects she set her heart upon.

The plaquette and dedication are cataloged at the NGA under inventory 2017.112.1

Prior to the gallerist’s ownership, the plaquette formerly belonged to the Spanish collector Pablo Bosch whose group of Renaissance Medals remains the largest in Spain, preserved at the Museo Nacional del Prado in Madrid.

Following the gallerists’ acquisition of a scarce 16th century terracotta medal, the gallerists found it appropriate to donate it to the National Gallery of Art whose vast holdings of Renaissance medals are the most important public collection in the United States.

Renaissance medals represent the genesis of modern medals still culturally relevant and in-use in modern times. In 2007 the National Gallery of Art published their authoritative catalog of Renaissance Medals, representing 957 medals in their collection and expounding upon the importance of medals for both artists and patrons and their role in culture throughout the centuries.

The terracotta medal donated by Old World Wonders is a unique addition to the collection since most medals of the Renaissance were cast in bronze and other precious metals.

“This medal of the little-known poet and astrologer Giovanni Francesco Tinti is of particular interest because though it follows the typology of a bronze medal, it is made of terracotta.  It seems to have been created with very fine clay pressed into molds and then fired.

Examples of the medal have been excavated in at least four locations in Tuscany:  In the ruins of the tower in the village of Porcari (near Lucca), in the ruins of a structure at the summit of Monte Giovi (about 20 miles west of Florence), under the floor in a chapel in the convent of Santa Maria a Ripa (near Empoli), and in the castle of Montalto.   Following the practice of burying medals in the foundations of buildings that was established in the fifteenth century, Tinti assiduously placed groups of his medals in protected sites for future discovery.  In an inscription on a clay tablet placed with medals at Santa Maria a Ripa, our astrologer boldly claimed: ‘I placed these (medals) so as to give an example to posterity.’

On the medal’s obverse the proud Tinti is crowned with laurel, wears Romanizing drapery and looks up at three stars placed in the field, a clear reference to his poetic and astrological aspirations.  On the reverse is Tinti’s coat of arms, which also includes three stars.”

The medal was inventoried in the NGA collections under: 2015.178.1.a and 2015.178.1.b. Tinti’s ambition for posterity appears to have succeeded him in this public reception of his otherwise obscure legacy.