The earliest medal made in Germany. Memorial medal of Margaretha Vischer 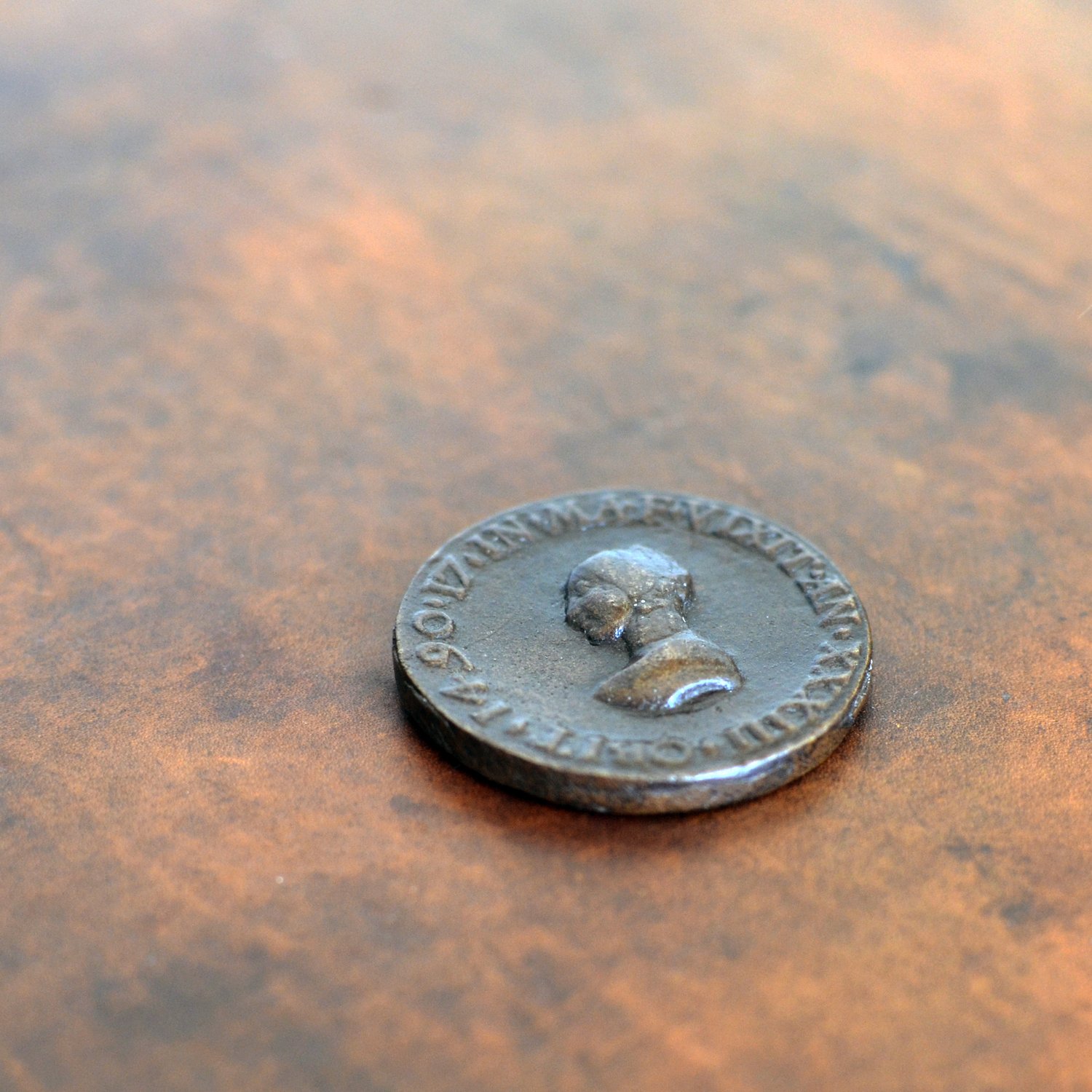 This otherwise modest object constitutes a unique discovery and rare offering. It is the earliest medal known to have been made in Germany and one of the earliest identifiable works by the famous Nuremberg sculptor and brass-caster, Peter Vischer the Elder, considered the “Dürer” of sculpture in Germany.

Before this discovery, the earliest known medal made in Germany was a portrait medal of Peter the Elder’s oldest son, Hermann Vischer the Younger, dated 1507, and known by only two examples at the Basel Historisches Museum and Cabinet des Medailles in Paris. Two additional early uniface medals made by the Vischer family foundry include a single portrait medal of Peter Vischer the Younger, dated 1509 and another of Hermann Vischer the Younger, known also by a single example and dated 1511. After this narrow group of medals, the advent of medallic art in Germany is heralded by Hans Schwarz in Augsburg during the 1510s.

Like the early 1507 portrait medal of Hermann, our medal is the same scale and appears inspired by antique coinage. The cast appears possibly flawed, perhaps intended to feature a horse and rider on its reverse like those observed on the verso of a tetradrachm of Philip II of Macedon, 359-336 BC. However, this would be a unique instance of a Greek coin imitated on a Renaissance medal. Nonetheless, Peter the Elder is documented as having an important collection of coins and Greek examples may have formed part of his collection, perhaps having reached him via the economic and trade relations between Nuremberg and Venice at-that-time, and consequently, Venice and Greece.

The obverse features a left-facing portrait bust of Peter the Elder’s first wife, Margaretha. She is thought to have died in 1490-91 and our medal confirms her death in early or mid-1490. The medal’s legend reads: MA.F.VIXIT.AN.XXXIII.OBIT.1490.17.IN. indicating Margaretha Fischer lived 33 years and died in 1490 on the 17th of January or June (it is uncertain whether the “IN” refers to January or June). Peter would have been 34 or 35 years old at-the-time of Margaretha’s passing.

Margaretha gave birth to the three Vischer sons that would later form the nucleus of Peter the Elder’s bronze and sculpture workshop, having a near-exclusive market on the medium throughout the entire region. Their talent and expertise are most apparent in their masterpiece: the Monument of St. Sebaldus in the Sebalduskirche at Nuremberg, completed by Peter Vischer the Elder and his sons between 1508 and 1519.

Margaretha died sometime after the birth of the couple’s third son, Johann (also called Hans der Giesser), who is thought to have been born in 1488-89 and probably named after Margaretha’s father, Hans Gross. Peter Vischer the Elder is again married by 1493 to Dorothea von Gericht.

It is believed Peter Vischer the Elder was wed to Margaretha around 1485. A document dated 4 October 1490, written by her father, is the only indication we have of Margaretha’s personality, which appears more practically inclined rather than absorbed in material goods. In the document her father recalls his wedding day gift to her of a green mantle and veil which he requests of Peter the Elder, before all those present at the wedding, that Peter ensures she refrains from selling or trading them after the wedding.

Though later than the medal for Margaretha, the bronze epitaph Peter and his sons completed for Godart Wigerinck in 1518, at the Marienkirche in Lübeck, features similar legends on three of the four corner medallions memorializing the Wigerinck family. Related to both Hermann’s 1507 medal and Margaretha’s medal are the choice enumeration of dates in Roman numerals, the shortened Latin Obitus rendered as OBIT and the feature of the complete date-of-death, inclusive of day and month.

The contemporary historian, Johann Neudörffer, noted how Peter the Elder would work in his foundry daily and Cecil Headlam’s monograph, in commenting on the many private struggles Peter endured, commented that his “grief [was] made bearable perhaps by his absorbing enthusiasm for his work.” The preparation and casting of a medal in memory of his first wife would have been tantamount to his coping with the loss of his wife as well as a means to memorialize her.

Peter Vischer the Elder is celebrated not only for his talents with brass casting and sculpture but also his role in directing the sculptural milieu of Nuremberg, and Germany at-large, out of its Gothic origins and into the burgeoning Renaissance. The present medal is arguably one of the earliest confidently ascribed works by Peter, who in 1489, was recognized by his guild and officially assumed operation of his father’s workshop. Another of his earliest works is the cast figure of a “bough-breaker” at the Bayerisches Nationalmuseum, also dated 1490, and thought realized in collaboration with his lifetime friend and sculptor, Adam Kraft, considered to be a work that marked the beginning of German Renaissance bronzes as a genre.