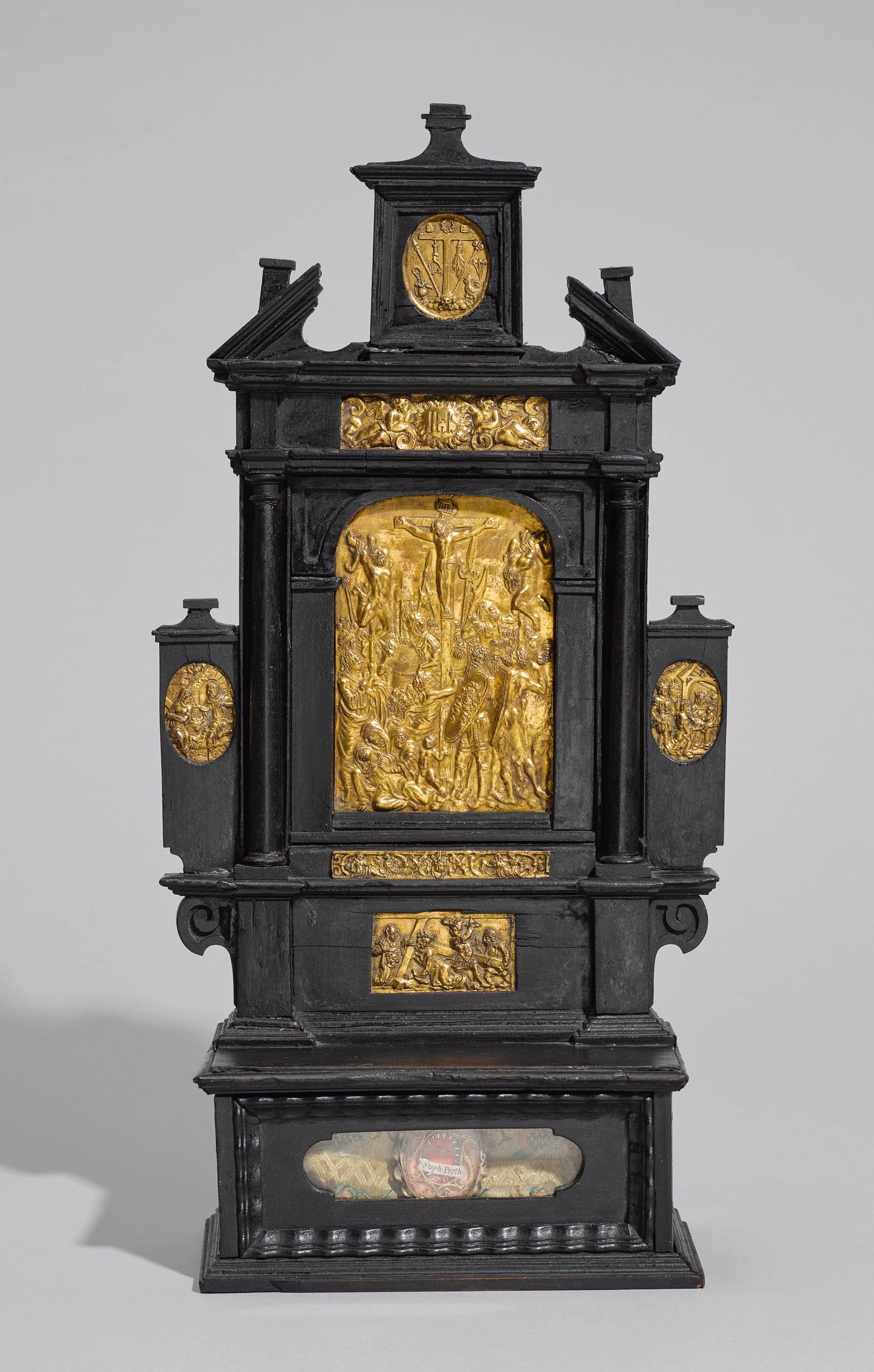 The frame of this small tabernacle follows the types emanating from South Germany during the last part of the 16th and beginning of the 17th centuries. It features an open triangular pediment with aedicule bearing a gilt bronze relief of the Arma Christi surmounting an entablature frieze below with a relief of the Christogram: IHS. The central, arched niche, flanked by columns, fits a rectangular relief (obfuscated in the upper corners) depicting a superbly overworked cast of Moderno Galeazzo's Crucifixion, originally conceived in Italy at the end of the 15th century. Below is a narrow decorative relief depicting seated figures and animals flanking a cherub head while additional ovular reliefs of the Adoration of the Magi and Nativity feature along the outer edges with corner scrolls set beneath. A relief of Christ Carrying the Cross is displayed along the base. Other examples of this later relief are known at the Musee de Cluny, Bayerisches Nationalmuseum, et al. It's motif descends from prints of the Small Passion series by Albrecht Dürer.

While the central relief is of Italian origin the accompanying designs are of South German invention, attributed to a generically described Augsburg workshop responsible for the production of house altars and other devotional items. Examples of several reliefs featured on this altar are known by independent examples in various German collections, judged by Ernst Bange as made around 1520-25, though Ingrid Weber more convincingly dates them to the last quarter of the 16th century. Another house altar from the same workshop is at the Landesmuseum Württemberg in Stuttgart.

Of unique import is the central relief of Italian design. Moderno's successful reliefs quickly penetrated other European courts outside of Italy and the artist himself was briefly active in France. Other examples of Moderno's works adopted by German craftsman can be observed in productions like the feature of this relief on a bell cast in 1667 by Bartlme Kettelat for the Parish Church in Schwaz, an ebonized wood tabernacle of similar dating and origin, formery in the Rho collection, featuring an embellished cast of Moderno's Entombment or a 1540 coffin plate for Cardinal Albrecht von Brandenburg reproducing again Moderno's Entombment (Kunstgewerbemuseum, Berlin) and an early 17th century German ebonized wood and silver pax frame housing a cast of Moderno's Dead Christ Supported by Mary and John at the Museum fur Angewandte Kunst.

The plinth on our house altar would have originally featured a drawer, as observed on other examples of similar origin and date. The framed feature of a reliquary of Saint Stephen is likely a later and interesting replacement.