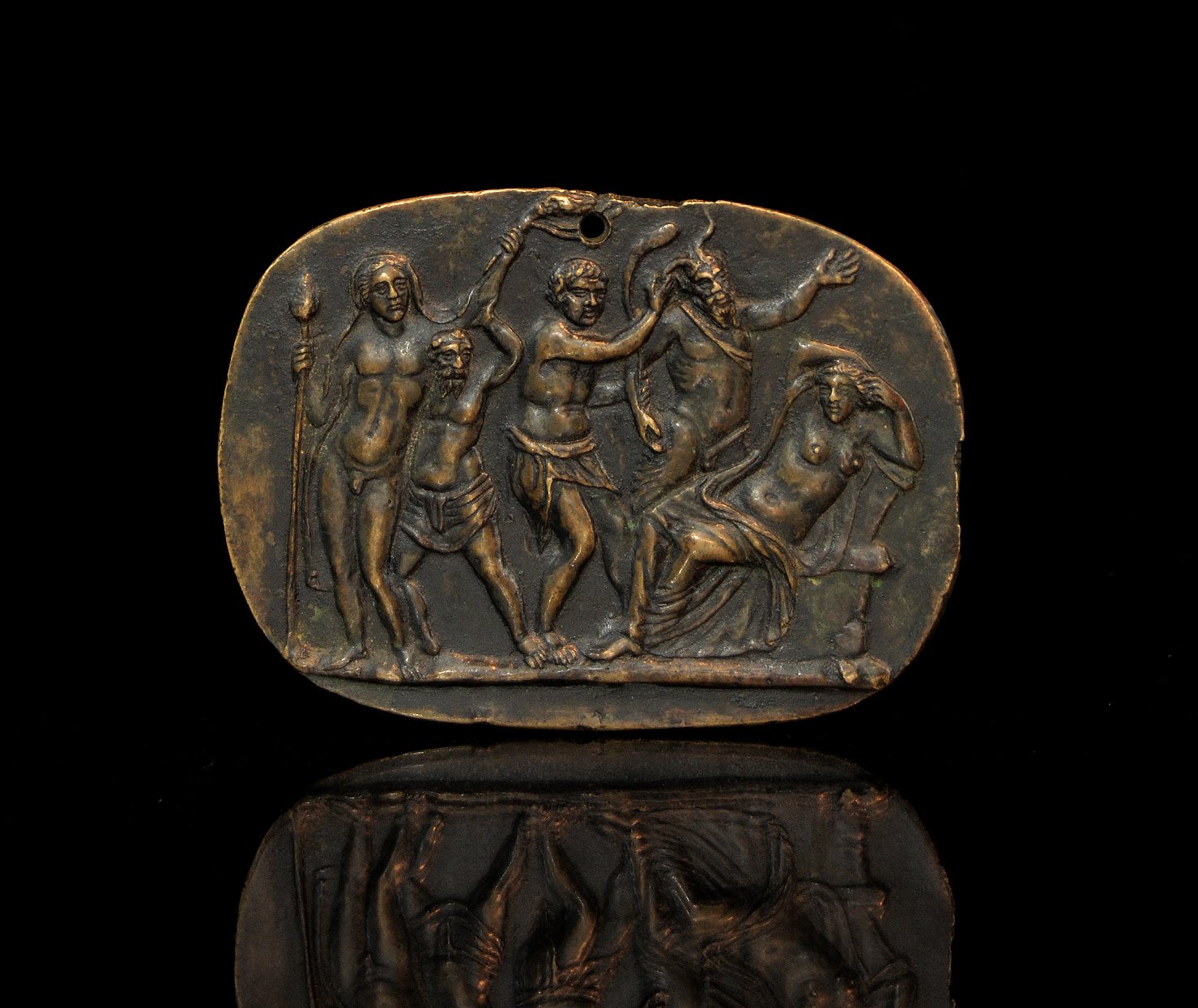 This large plaquette of Bacchus Discovering Ariadne on Naxos is a freehand interpretation after an antique Roman sardonyx cameo dating to the 1st or 2nd century AD and depicting a scene in which the sleeping Ariadne is discovered on Naxos by Bacchus who takes her as his wife.

The creation of the present plaquette is an apparent celebration of the aforenoted cameo, esteemed highly during the Italian Renaissance. Its greatest distinction is found in its reproduction as one of the tondi decorating the inner courtyard frieze at the Palazzo Medici in Florence, executed by Donatello’s collaborator, Michelozzo, ca. 1555-60.

The Florentine presence of the cameo can be observed in other works of the period such as its inclusion on the frontispiece of Francesco Rosselli’s (1445-1513) work on Ptolemy, made circa 1476-80 and on several illuminations by Monte (1448-1533) and Gherardo di Giovanni di Miniato del Fora (1445-97): Livy’s De Secundo Bello Punico, ca. 1479, and Pliny’s Natural History. Noteworthy is Minato del Fora’s workshop adjacent to the Palazzo Medici.

The cameo’s motif also appears on Fra Carnevale’s 1467 painted altarpiece on a panel of the Birth of the Virgin for the Church of Santa Maria della Bella in Urbino (Carnevale was a student in the prolific Florentine workshop of Filippo Lippi).

Most noteworthy of our plaquette’s association with Donatello is its connection with a cognate plaquette of Eros Driving a Biga, equally scarce, exact in scale, and also reproducing another of the tondi at the Palazzo Medici. The impetus for the Eros Driving a Biga plaquette is found on a medallion adorning the bronze Bust of a Platonic Youth, attributed to Donatello or his circle, made circa 1453-54, and featuring another enlarged freehand interpretation of the Eros Driving a Biga subject. Doug Lewis comments “it may be possible to suggest that Maso [di Bartolomeo], or another Florentine collaborator, may have been the agent who converted Donatello’s primary invention of the Platonic Youth‘s medallion into its cognate, derivative plaquettes.”

An attribution to Bertoldo could be suggested on stylistic grounds. A comparison of Bertoldo’s manner in rendering the male upper body reveals a consistent portrayal of the pectorals and abdomen (see for example, Bertoldo’s bronze of Hercules with the Apple of Hesperides). The abdomen is contained in a defined ovular shape, separated into halves by a sculpted channel that descends to the navel. A small protruding belly is sometimes featured, accentuated by an indented upright crescent along the lower abdomen. The pectorals are toned and unpretentious, carrying the vertical channel up to the base of the neck. The modeling of the draperies are stiff yet undulating with their curved and weighty folds defined by thickly carved channels which feature on Bertoldo’s large reliefs at the Palazzo Scala and appear scaled to the same effect on the smaller reliefs of Ariadne on Naxos and Eros Driving a Biga.

Though not as apparent, the modeling of hair between the small bronze reliefs and some of the characters featured on the Palazzo Scala appear related, making use of repeated strokes that give the impression of stylized hair. Most convincing are the horses belonging to the Eros Driving a Biga relief which are uniformly modeled in league with Bertoldo’s manner. Manfred Leithe-Jasper notes Bertoldo’s signature use of a semi-circle to connote the definition of the cheeks on his modeled horses, a feature present on the Eros plaquette. The face of the horses likewise follow after Bertoldo’s unusual caricature-like rendering of their heads with eyes protruding under bulging lids, defined by thick integrally cast strokes. Their nostrils are gaping and their mouths are unnaturally recessed down the length of their head. A series of monotonous strokes define where their heads meet their necks, implying the folding and stretching of skin. The manes are short and lack vitality while their tails are a chief indicator of action, also rendered by wavy thick strokes accentuated by a dark patina. The straps of the horses’ bridles on the Eros plaquette also follow closely with those featured on the horses of Bertoldo’s Vittoria relief at the Palazzo Scala. The emphasis on the extensors of their legs, which are defined by thickly carved channels in the Eros plaquette, are analogous with the legs of horses depicted in Bertoldo’s other works. Consistent also is his employ of pointed ears which appear used to define a sense of motion for each horse. Lastly, Bertoldo’s lack of reliance on intensive afterwork on the cast bronze is evident among these plaquettes, a practice commensurate with his skill as a caster and forethought as an artist.

The stylistic manner of these reliefs, if not by Bertoldo himself, must surely derive from another qualified artist belonging to Donatello’s circle, realized in the ambit of the tondi he oversaw for the Palazzo Medici.

Condition: A contemporary cast with a handsome warm brown patina. The finest of three documented examples (one lost during WWII, the other on display at the Metropolitan Museum of Art). Pierced at top.