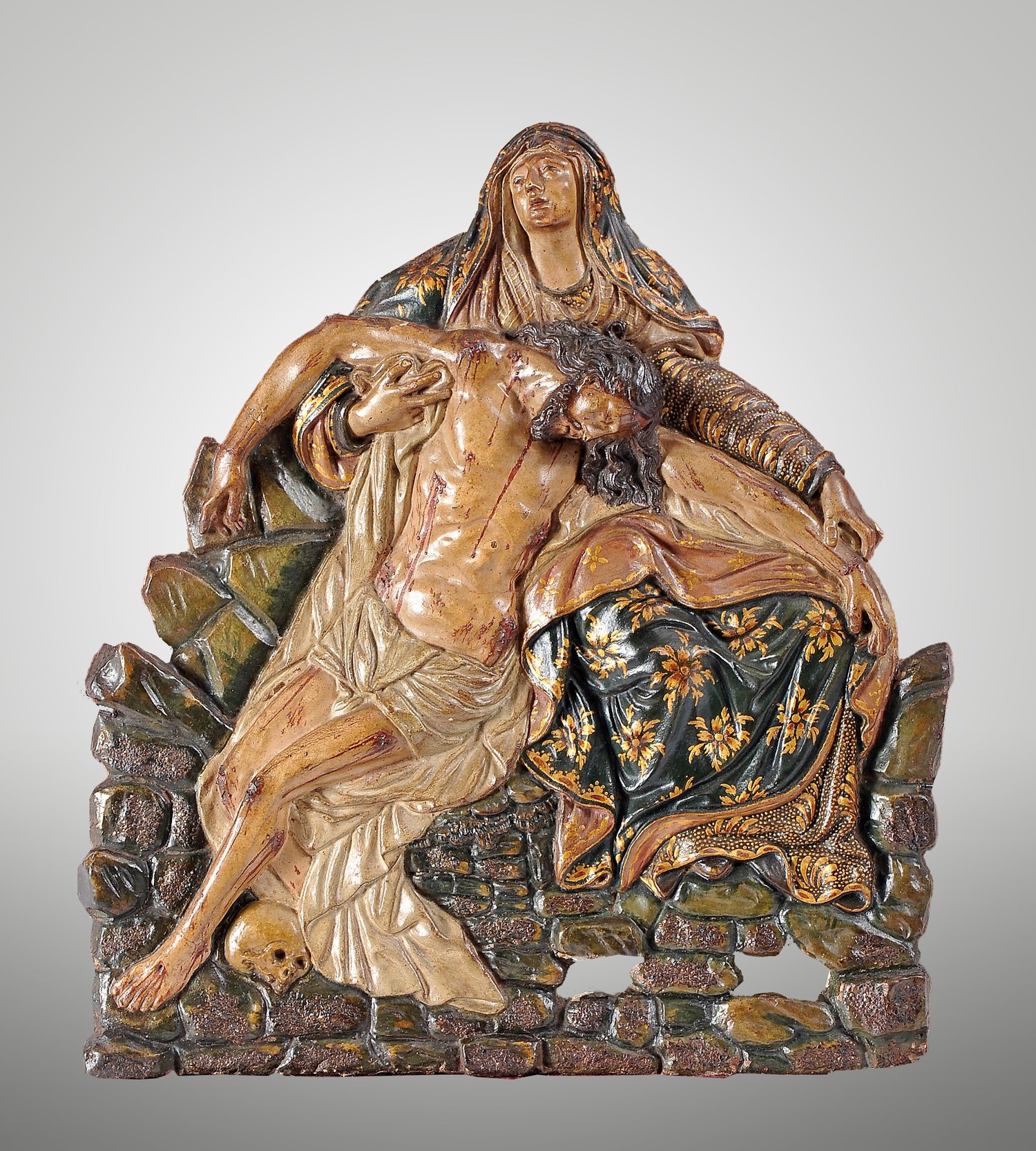 This eloquent polychrome terracotta depicting the Pieta is derived from a design by the Italian sculptor Guglielmo della Porta, realized by his assistant Jacob Cornelis Cobaert in Rome around the year 1570. Giovanni Baglione’s 1642 publication of Cobaert's artistic career mentions a "Christ expired in the arms of the Virgin Mother, most beautiful” made by Cobaert. The 1609 legal proceedings of Guglielmo's son also mention a “dead Christ in the arms of the Virgin” that Cobaert made after Guglielmo's designs. In those same documents Cobaert himself mentions a Pieta he modeled in clay. The design was widely produced in Guglielmo's workshop, cast in bronze and gilded. A gilt cast at the National Gallery of Art is an exemplar of this production. The design became widely popular in Italy and abroad. Ulrich Middeldorf called it the “most famous sacred image in Europe around the year 1600," and this can be attested to by the quantity of surviving examples cast in bronze and its reproduction in a variety of mediums including stone, wood, wax, terracotta (such as the present example), stucco, ivory, silver, alabaster, amber, glazed ceramic, print and painted reproductions.

The motif's earliest datable appearance outside of Italy is found in a freehand silver reproduction made by Rodrigo de León in 1581 for a pax kept in the Cathedral of Cordoba's Treasury in Spain. The relief was commonly reproduced in Spain and influenced two paintings by El Greco, ca. 1575, who was probably exposed to it while active in Rome.

The most significant appearance of the motif's diffusion into Spain is its embellished feature on the relief program for the Cathedral of Pamplona's altarpiece completed by the sculptor Domingo de Bidarte. The motif followed a natural migration into Portugal where it was frequently reproduced during the 18th century in polychrome wood and terracotta versions, both in relief and uniquely in-the-round.

While other Portuguese freehand polychrome terracotta examples are known our example manages a particular faithfulness to Cobaert's original model while exemplifying an incredible finesse with regard to painting of the fabrics and details of the ground.

Freely mounted to an old display board relined with new black velvet backing. Ready for display or for hanging on a wall.