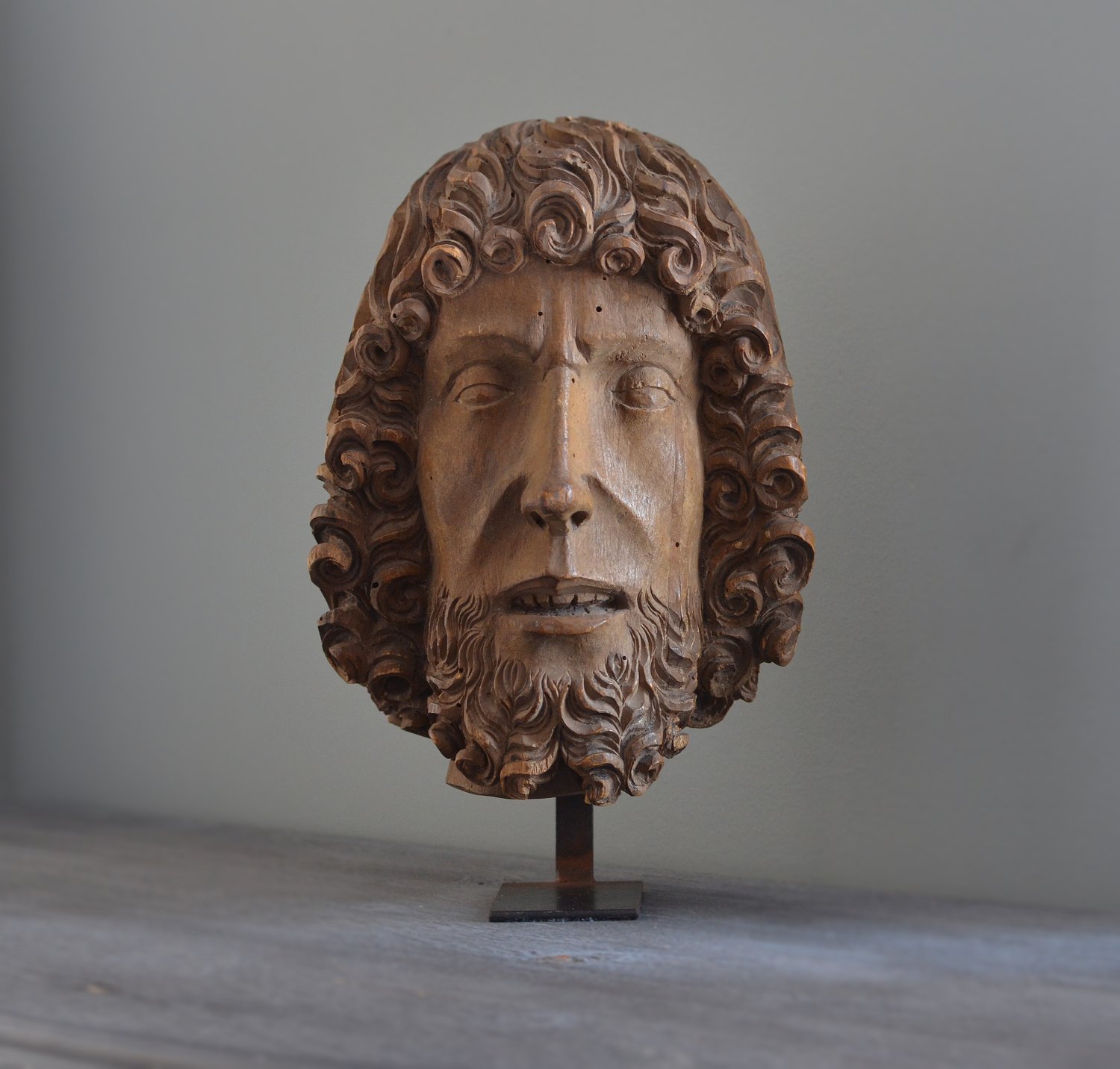 Head of John the Baptist

The present bust, presumably depicting John the Baptist and carved three-quarters in-the-round, is an austere and arresting portrayal of the saint whose monumental expressiveness in small-scale is both astounding and captivating. The sunken features of the Baptist’s elongated and idealized face, boasting a noble linear character framed by tightly packed curls, invites a Northern Gothic appeal meets a Nordic simplicity still in-vogue today. Indeed, the combination of these themes point to an origin with North Germany’s most celebrated late Gothic artist: Bernt Notke, called the “Donatello of the North.”

Although debate persists concerning the clarity of the role of Bernt Notke as a painter, sculptor and entrepreneur operating a diverse and capable workshop descendant of Flemish prototypes, his creative brevity in sculpture is best recognized through his inventiveness of style amidst the less adventurous gothic sculpture produced in North Germany during the late 15th century. Notke’s ingenuity developed out of the local Hanseatic culture and the sculptural traditions of Lübeck and its surrounding areas while imbuing his inventions with an adroit monumentality unique and innovative for its time.

Notke’s artistic activity began in Lübeck during the 1460s where his workshop was responsible for the creation of two large-scale painted productions of the Danse Macabre at Marienkirche in Lübeck (lost) and another in Nicolai Church in Tallinn, Estonia. Notke’s earliest recorded sculptural accomplishment is the triumphal cross group for Lübeck Cathedral, realized as a memorial to Bishop Albert Krummedyk, begun ca. 1470-72 and completed in 1478. The high-quality execution of the figures of Christ, Mary, St. John, Mary Magdalene and Krummedyk, are considered works by Notke’s own hand. According to a parchment note discovered hidden within a crevice of one of the sculptures, the ensemble was completed with five assistants: an assistant carver, painter and three shippers.

Certain idiosyncratic features suggest our bust of John the Baptist is a possible work by Notke. The treatment and sculptural handling of the bust with its elongated face, pursed brow and straight nose featuring a long narrow bridge is comparable against several works including his idealized depiction of St. George for the masterful sculptural ensemble of St. George and the Dragon at Storkyrkan Cathedral. An earlier impetus is observed in his small figure of Christ on the Stillinge Church altarpiece in Denmark, ca. 1476-80.

The articulation of the lips, treatment of the slightly agape mouth with exposed teeth and commensurate depth-of-carving for the nostrils and mouth are likewise reflected in his sculpture of Christ on the triumphal cross in Lübeck Cathedral among other works.

Further uniform is the precise treatment in which the tightly packed curls and gyrating waves of hair are carved heartily into the wooden form. A detailed comparison of Notke’s approach to carving hair can be found in analogous works like the Princess belonging to his St. George group or his free-standing figure of St. Ansgar (Hamburg Archaeological Museum). In particular, an early intimation of the corkscrew beard of our Baptist is observed in Notke’s carvings of heads for the organ panels at Marienkirche in Lübeck, ca. 1475-77 (lost).

Our bust especially shares a stylistic proximity with a sculpture of St. Erik at Strängnäs Cathedral attributed to Notke and thought commissioned by Bishop Kort Rogge in 1487 as part of the inauguration of St. Erik’s chapel and altar. The Baptist is further congruent with the fragmentary bust of a saint in the collections of Turku Cathedral, attributed to Notke, ca. 1497-1500.

Our bust of John the Baptist may have been produced in Lübeck (Germany), Stockholm (Sweden) or any of the Baltic areas in which Notke was active. He is documented in Stockholm intermittently from 1483-97, serving as a mint-master there from 1491-93 and he is thought to have departed Sweden after the deposition of Sten Sture the Elder’s first regency over the territory.

It is questionable whether the Baptist may be the fragment of a larger figure group executed in relief or a Johannes-schüssel intended for display on a church altar or used as part of the lid to a baptismal font. Its scale is commensurate with other small Johannes-schüssel’s like one formerly attributed to Notke’s pupil, Henning van der Heide, but now recognized as a possible work by the eponymous Immaculate Master executed for Norrby Church and preserved in the Swedish History Museum. Similar regional examples are found at Bollnäs church in Hälsingland, made by Haken Gulleson or his atelier, and another at Skellefteå country church. Distinct, however, from these aforenoted heads is the idealized rather than naturalistic manner of our bust which features an atypically short beard, virtuously portraying the Baptist in a noble manner more European in essence than Nordic.

Examples of Notke’s sculptural works are scarce in the art market, making this small but striking artwork a rare opportunity.

Condition: Minor losses and wormholes. Minimal remains of former polychromy. Old dowels inserted along proper left of the sculpture to consolidate a loss due to an old crack. Mounted on a modern metal stand.

Provenance and references available upon request.