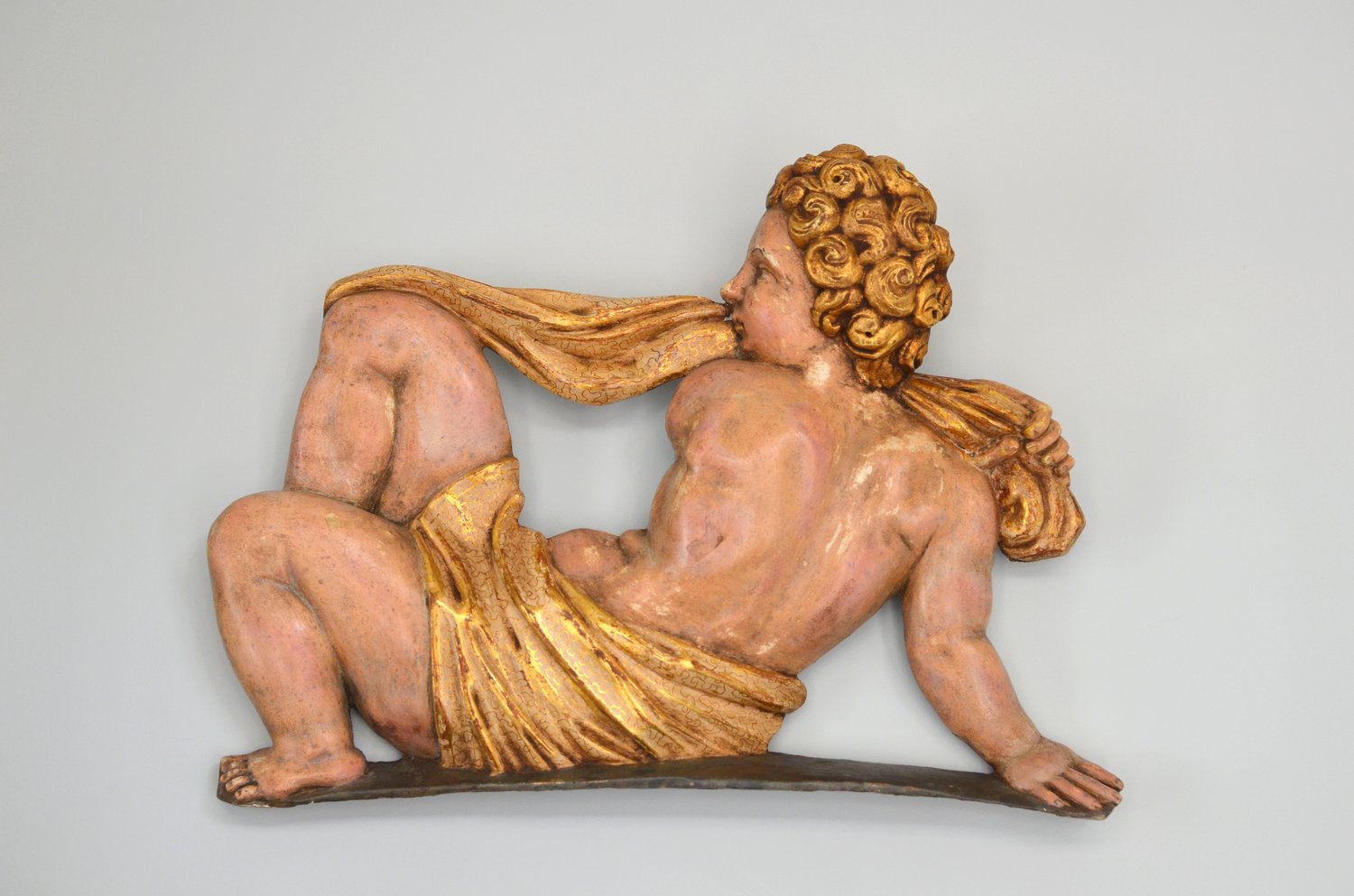 The present putto would have probably been one of two conforming reclining putti mounted atop an arched tympanum on a Spanish retable of the mid-to-late 16th century. Such putti in wood relief frequently adorned the architectural components of Spanish retables, flanking cartouches atop friezes or positioned atop the tympanums that surmounted high-relief scenes depicting Christ’s Passion.

The Italianate manner of our putto owes an indebtedness to the progressive and prolific activity of Alonso Berruguete and his followers who helped nurture Italian influences throughout Renaissance Spain. In particular, our putto recalls the manner of Berruguete’s assistant, Francisco Giralte, tempered also with the influence of another contemporary, Juan de Juni, with its well-modeled musculature, weighty thighs, pouched belly, voluminous coiled hair and dramatic tug upon the drapery.

Particularly, the hair and physiognomic stature of our putto follows the taxonomy of Giralte’s style, comparable against the putti on his alabaster cenotaph for the Bishop of Plasencia in Madrid or more specifically with the earlier wood-carved and polychrome putti surmounting his retable of San Juan in Arrabal de Portillo in Valladolid. An especially comparable figure can be found in the infant Christ in Giralte’s high-relief scene of the Nativity for the retable of Obispo Chapel in Madrid. Our relief may have prefigured this sculpture in-the-round, which displays Giralte’s increasing achievements in the medium, or alternatively may have been inspiration for a close follower.

Although carved in low-relief, a monumentality characteristic of Giralte, or his influence, is implied in the torsion of our putto whose physical presence is made vivid by the turn-of-his-back and the heavy, deeply-creased draperies. The management and care given to our carving shows a qualified hand-at-work. Likewise, its polychrome is of notable eminence while the etched treatment of the gilding is refined, simplified and tasteful. The overall balance of the composition, though removed from its context, stands on its own merit as a product of enlightened and superb craftsmanship.