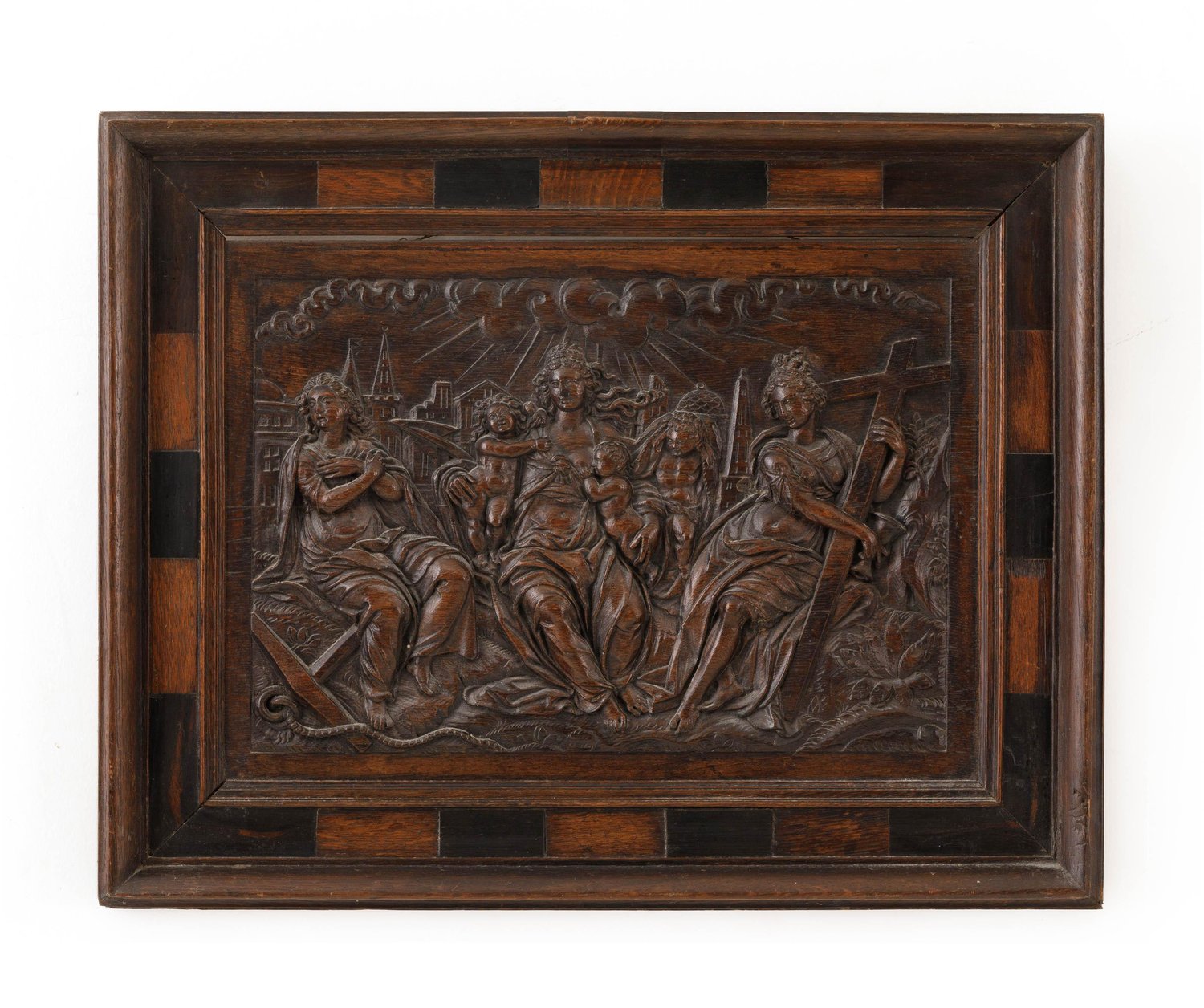 The present carving, of Flemish origin and from the first quarter of the 17th century, was executed during the Golden Age of Dutch art. The relief depicts the figures of Pietas, Caritas and Fides: the divine virtues of Hope, Charity and Faith. Each of the Virtues is articulated with exceptional care and the skill of a talented hand. The composition is bursting with energy, emphasized by the active putti surrounding its central protagonist and the emergence of the figures in the foreground, silhouetted against a cityscape with the upper horizon framed by clouds and rays-of-glory.

The relief’s design is indebted to late 16th century Mannerist influences shown in the expressive postures of the figures and the billowing hair of Charity. Other Flemish artists approached this theme like the painters, Maarten de Vos, Maarten van Heemskerck, et al. However, our particular carving is an amalgam of three individual compositions engraved by Jan Pietersz Saenredam in 1601, and based on the designs of his mentor and long-time collaborator, Hendrik Goltizius (presumably following inspired Latin prose conceived by the Haarlem Humanist, Cornelis Schonaeus).

The relief is set in an elaborate checkered, wood-inlaid frame but its scale and shape suggest it probably once formed part of an elaborate Beeldenkast or impressive Dutch oak cupboard, which were fashionable during the first half of the 17th century and were among the most expensive and distinctive furniture pieces of their era. Beeldenkast’s were frequently used as dowry to accommodate the fine linens of newly married couples, displayed in the common area of the home where guests could observe the wealth and fine taste of its owners while simultaneously conveying their respective virtues. A dated Beeldenkast at the Metropolitan Museum of Art likewise includes panels depicting the Three Divine Virtues (Inv. 64.81) among other scenes in-relief. The author of our panel is certainly a master in their trade, yet-to-be identified, and perhaps from Haarlem or its outlying municipalities.

Condition commensurate with age. There is a loss to the nose of Caritas which has potential to be restored.