Fragmentary Stone Bust from the school of Adam Kraft, ca. 1500-20 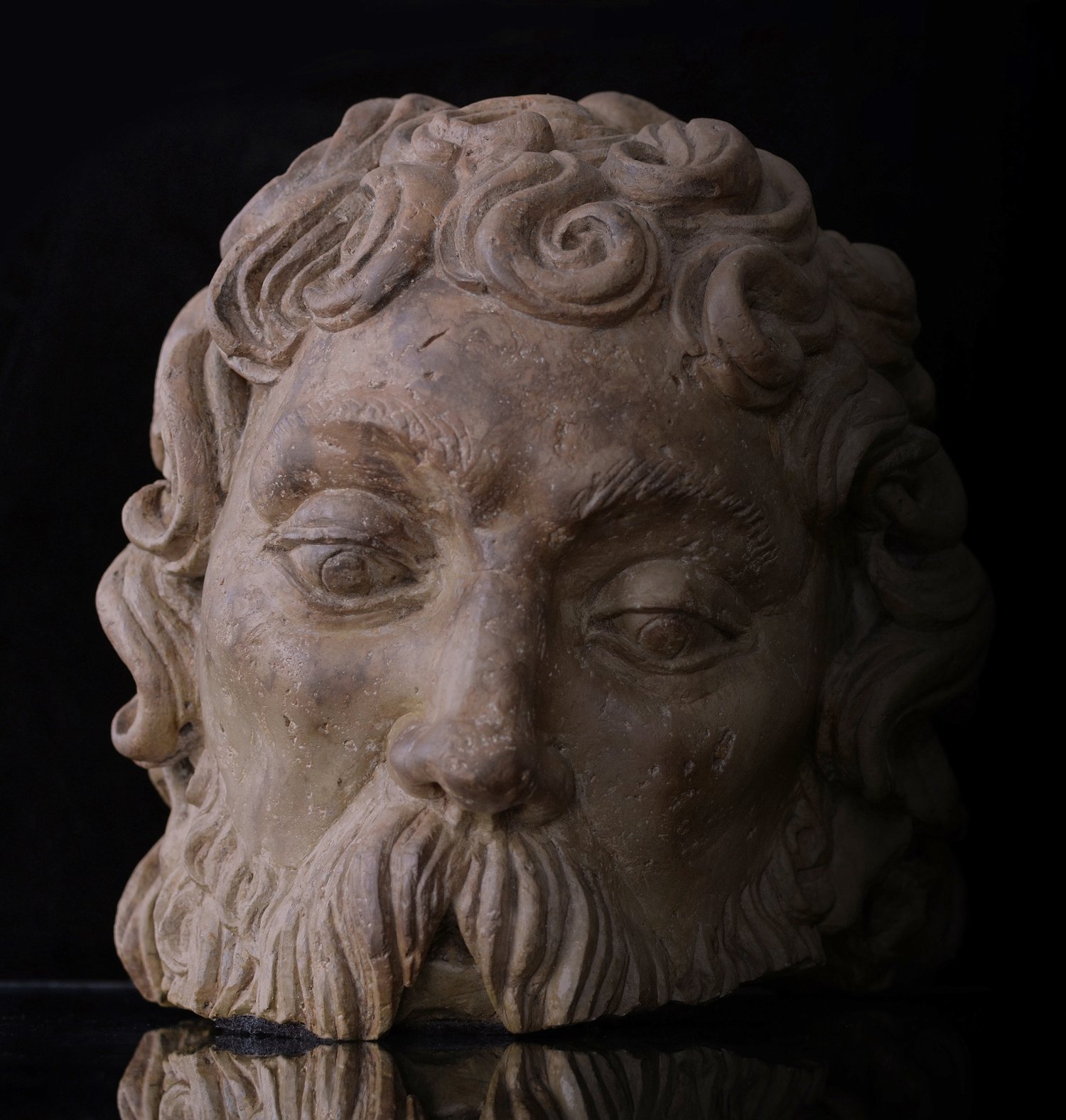 A Fragmentary Stone Bust of an Apostle or Saint

The present fragment probably belonged to a near life-size statue damaged during war or perhaps during the iconoclast movements of the Reform era. The statue was probably indoors and set into a niche or as part of a covered high-relief stone composition in which our figure looked downward and slightly toward the left, evident by the unfinished and roughhewn character of its reverse.

This impressive sculpture lingers between Gothic and Renaissance sentiments and can be specifically placed in the area of Nuremberg, Germany sometime between 1500-20.

There is an immediate and striking comparison to the work of Adam Kraft, one of Nuremberg’s most celebrated Gothic-Renaissance stone sculptors. However, notable differences in the workmanship of our bust display an equal influence from another of Nuremberg’s respected sculptors: Veit Stoss.

Both sculptors operated workshops of varying size while undertaking their large and ambitious commissions like Stoss’ limewood Angelic Salutation of 1517-18 and Kraft’s earlier stone sacrament house of 1493-96, both for St. Lorenz church.

Kraft, in particular, did not hire simple journeymen but a minority of competent craftsman whose own signature mason-marks are featured on the St. Lorenz sacrament house as well as their near life-size portraits of Kraft himself and two assistants supporting the entire structure in homage to their humble discipline. Several of the reliefs on the sacrament house, particularly a representation of Ecce Homo, may possibly show evidence of our sculptor’s hand-at-work.

Kraft is known to have kept a retinue of five or fewer assistants at any given time and Kraft himself was lauded by others as an excellent teacher in his trade. It’s quite likely the sculptor responsible for our fragment was one of the few assistants active in Kraft’s studio at an early date. A point of reference would be the penitent thief of Kraft’s Crucifixion group of about 1487-90, originally placed at the end of his Stations of the Cross which secured his local fame. The Crucifixion group remains preserved in the courtyard of Heilig-Geist-Spital in Nuremberg. The bold face of the penitent thief, with a mouth hidden beneath the shadow of his thick mustache and a head, slightly turned with a downward gaze, suggest our sculptor was probably familiar with Kraft’s creation.

Our sculptor certainly appears involved as an assistant working on the Peringsdorffer epitaph, attributed to Kraft, and thought realized in 1498. The epitaph was originally in the cloister of the Augustinian Monastery in Nuremberg and in 1816 was moved to the northern side of the Frauenkirche. The hand of our artist can be seen in the worshipers on the left which include representations of the Pope, Emperor, a Cardinal, Bishop, et al, and along the right, members of the Peringsdorffer family. The character of the Madonna and Child’s hair and face, both of which compare favorably against another independent sandstone statue of the group at the Germanisches Nationalmuseum, also attributed to Kraft, ca. 1496, may show a possible participation from our sculptor as well.

There is an evident influence from Stoss in these two above noted works ascribed to Kraft, particularly in the dramatic handling of the drapery and in some of the facial physiognomy of the characters. Distinctive of our sculptor, however, is the manner in which the hair lays upon the flesh like soft-serve ice-cream or as though squeezed from a baker's piping nozzle. The grooved channels cut along the tufts of hair are in the form of a V, usually with two incised channels, altogether terminating in a soft but eloquent point. These are distinct from Kraft’s blunted tips, less voluminous, narrowly treated, sinewy, noodle-like hair and more deeply excavated curls that courageously test the integrity of the stone.

Another distinctive feature indebted to Stoss’ influence, are the arched brows forming a V where they meet above the bridge of the nose, always slightly indented. The eyelids are carved slightly raised and with an eloquent stroke around the entirety of the eye. Particularly, the brows are chased into the stone, though unlike Stoss’ freer approach, our sculptor prefers a series of parallel, angled striations. The orbs of the eyes are bulbous and the pupils subtly protrude from them, delineated also by a circular stroke chased into the stone. The outer corner of the eyes features subtly delineated crow's feet. There is less depth in the sockets our master's work, diminishing its expressive potential in favor of a more sublime Gothic approach.

Overall, however, our sculptor lacks the psychological pathos found in both Kraft and Stoss’ works. There is a preference for a still potent Gothic austerity in the solemn expression of our head and that of the figures featured on the Peringsdorffer epitaph. However, our maker’s pathos appears achieved in his evidently most mature work: a high relief sandstone sculpture depicting the Resurrection of Lazarus along the exterior south aisle of St. Sebaldus Church. The rather obscure work is set alone and much of its original state is entirely lost-to-time. Only fragments of the lower portion of this relief are original, preserving the face of Lazarus and that of an attendant woman seizing the drapery at his feet. The manner in which Lazarus’ hair is carved, the delineation of the eyes and specifically, the brows, on these figures secure their relationship with our sculptor. The relief is documented as once featuring the date 1520 along with the coat-of-arms of Hector I Pömer, an influential Nuremberg Reformist who became provost of St. Lorenz in 1520, elevating him as one of the three most influential representatives on Nuremberg's church council. Interestingly, the relief was first attributed to Stoss and then later, to Kraft. However, it is most probable that this is the production of a distinguished and unique artist, one who had his origins among Kraft’s select assistants, later establishing his own identity as a successful sculptor following Kraft’s death in 1509.

Works of this kind are particularly scarce in the market, especially those associated with Kraft, one of Germany’s most appreciated sculptors of the late Gothic and early Renaissance period.