An important Florentine gilt bronze pax of the Virgin and Child, after Donatello 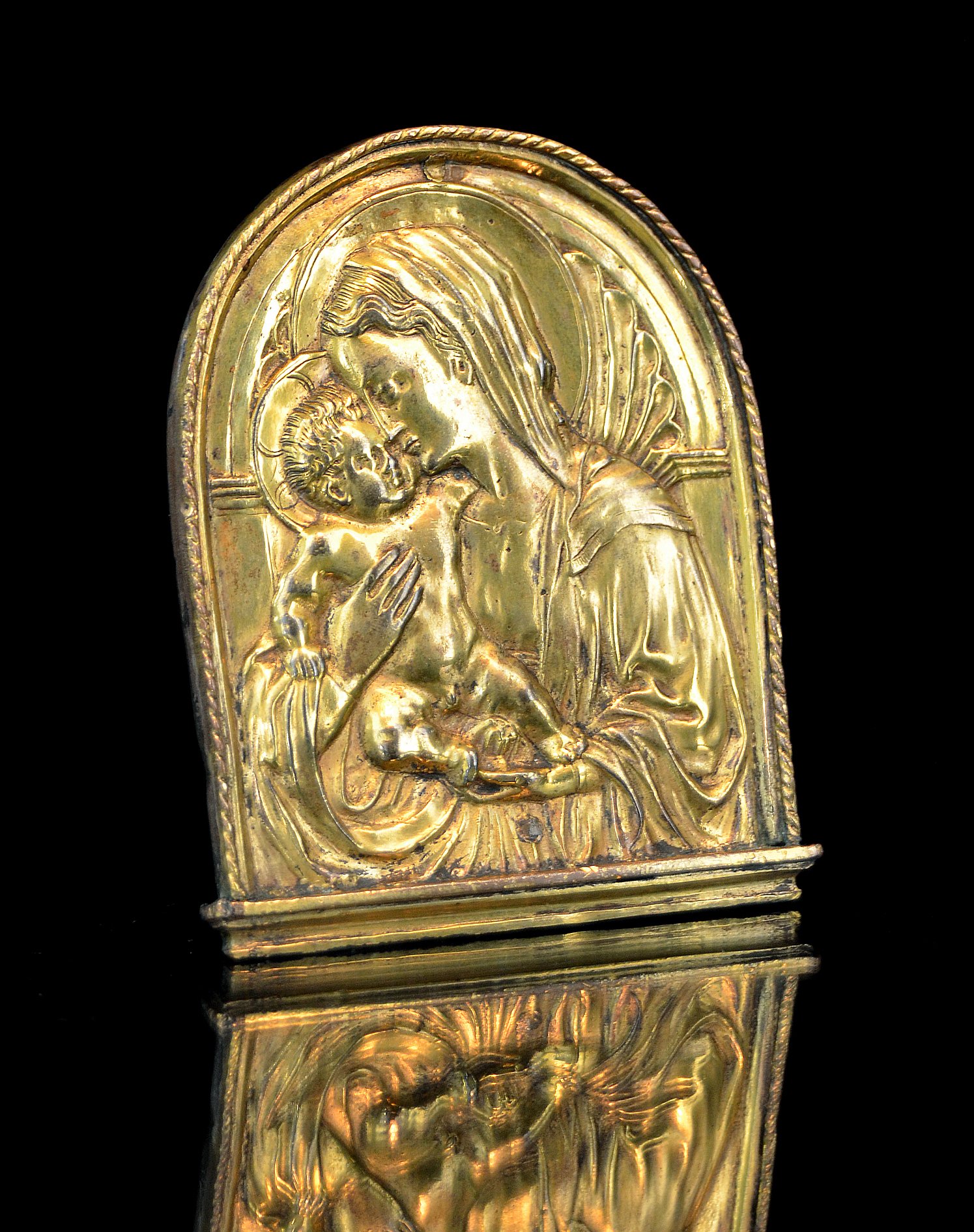 The present pax is one of the earliest examples of small relief work in metal from the Renaissance, considered by some to be the first example of a “plaquette” as the art genre is known today. The motif of the Virgin and Child is frequently compared with Donatello's marble Pazzi Madonna of about 1420. The subject of the relief most likely follows a larger scale original by Donatello from the 1420s, now lost, but copied in a painting by Giovanni di Francesco Toscani and partly imitated in a plaster tondo, dated 1428, by a sculptor close to Luca della Robbia. The motif was also interpreted in the marble Orlandini Madonna attributed to Donatello’s collaborator: Michelozzo. This small relief has, at times, been directly attributed to both Donatello and to Michelozzo. However, we believe it stylistically belongs to the less recognized, yet talented sculptor: Michele di Giovanni da Fiesole.

Michele began his artistic career in Florence where, during the early 1440s, he created various inlaid wood projects for the basilica of Santa Croce, including the door for a portal designed by Michelozzo, leading to the Medici chapel. By the second half of the 1440s he was probably an assistant in the workshop of Maso di Bartolomeo, another of Donatello's collaborators who, during this period, became the major bronze worker in Florence after Donatello's departure from the city in 1444.

Michele's best-known work is in Urbino where he assisted with the portal for San Domenico, begun by Maso and completed by Michele and another of Maso's trusted assistants, Pasquino da Montepulciano, in 1554. Michele remained in Urbino with Pasquino where they were tasked with decorating the apartments of Federigo da Montefeltro's ducal palace. In 1457 Michele was active again with Maso in Dubrovnik where he adopted Maso's role as cannon founder and official sculptor of that republic when Maso was tragically killed while testing a cannon there. Michele spent the rest of his life and active years in Dubrovnik and throughout Croatia.

Unbeknownst to past scholarship, it is this sculptor, mostly unrecognized on account of his better-known activity outside of Florence, that can be credited as one of the earliest possible protagonists of Renaissance small relief work in metal. Michele's proximity to Maso, Michelozzo and Luca della Robbia, and the touch of Donatello's influence upon these masters, provided a suitable environment to cultivate Michele's style and the ideas requisite for the advent of small metal relief production for paxes and private devotion in Florence and beyond.

The majority of examples of the present relief depicting the Virgin and Child are in public collections. Less than 40 examples are known and only a minority of examples of varying quality and age remain in private collections. Of all known casts the present one is the only surviving example apparently in its original setting. The frame recalls the same simple rope-molded border and predella of Michelozzo's marble Madonna and Child now at the Museo Nazionale del Bargello, of which, Michele probably had an awareness.

Unlike the majority of casts, our pax features what is probably a copper repoussé example of the relief, chased and worked over carefully by the artist's hand. It is possible the first versions of this relief were made using the repoussé method, forming the copper over a master model in wood or stone and mimicking the stamp-like production of stucco, cartapesta and terracotta reliefs typical of Florentine workshops during the Quattrocento. Such methods of reproduction may have initially preceded the use of individual wax-based indirect casts of the relief, later enterprising from the original model. Another rare surviving repoussé example of the relief is kept in the sacristy of St. Ursula church in Cologne.

The present pax may theoretically be dated to 1440-54, a period in which Michele would have possibly been active in Maso's workshop or circle and to Michelozzo. Michele is not known to have been active again in Florence after he departed for Urbino in 1554. The creation of this pax similarly coincides with Filarete's earliest bronze paxes from around 1445.

Overall, this pax is not only a scarce work of early Renaissance devotional art but also a celebrated composition reflective of Donatello's impact among his followers and the taste of patrons whose admiration for beauty and grace are still celebrated today. It is quite possibly one of the earliest examples of the genre of Renaissance plaquettes and remains an important object for our understanding of the origins of the genre.