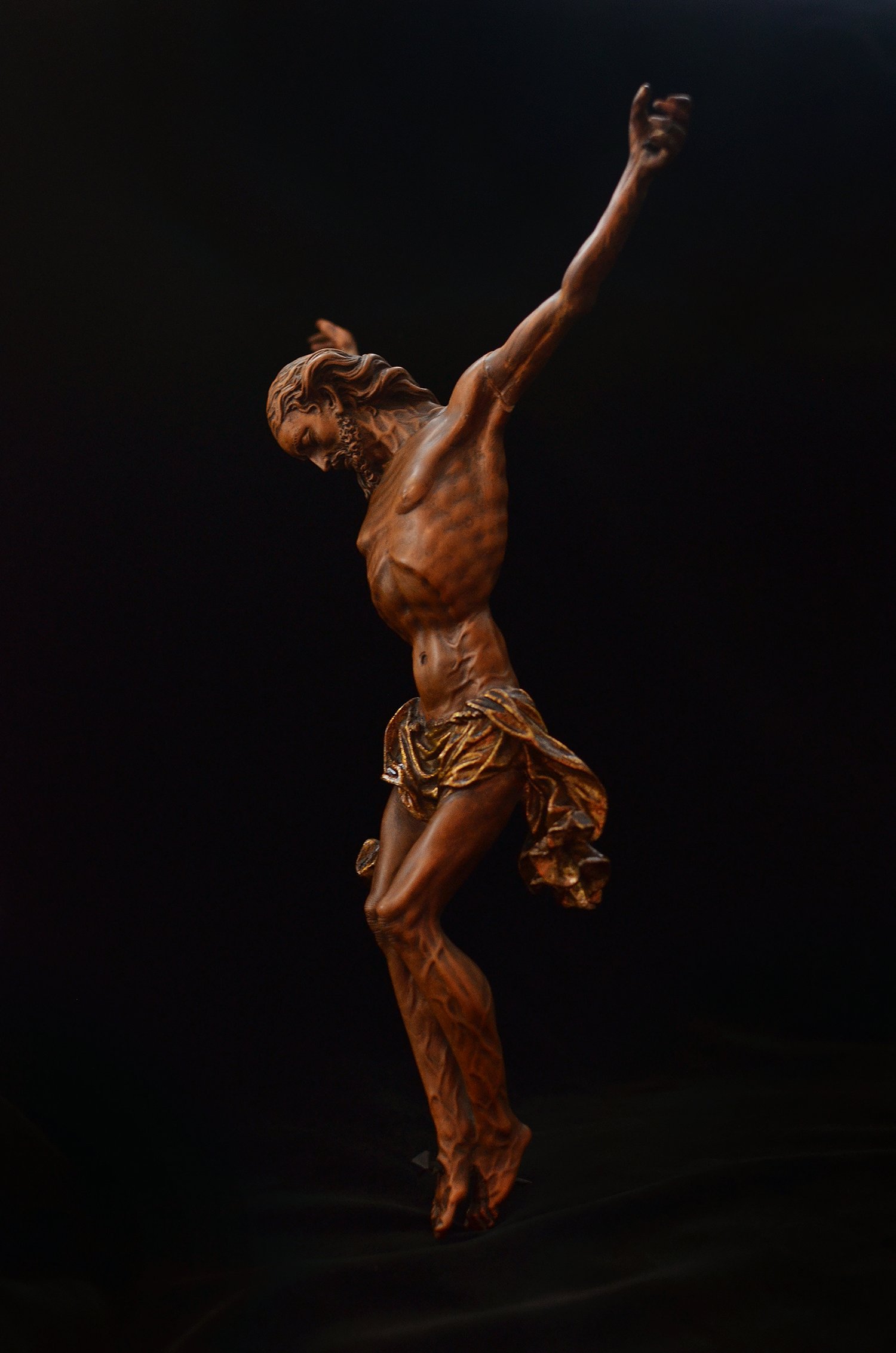 The present corpus exhibits the workmanship of a sculptor whose talents are emphatic of the wood and ivory carvers of South Germany and Austria during the late Baroque period. Its rich detail and elaborate, exaggerated features suggest the hand of a talented and individual sculptor.

The Italianate face of our Christ, integrated with a corpus of distinct South German or Bavarian influence, recalls the immediate impact of Balthasar Permoser, who was born in Bavaria, trained in Vienna and was active as an assistant to Giovanni Battista Foggini in Italy, before serving in Dresden under commission of Johann Georg III, Elector of Saxony. Permoser’s fourteen years spent in Italy introduced new ideas to his German peers, elevating his status as one of the foremost sculptors of the region.

While our corpus retains stylistic tendencies superficial to the late Baroque period, certain nuances distinguish it as the work of a unique sculptor. The closest figural and stylistic analogies to our corpus are observed in a corpus modeled by Johann Joachim Kändler for the Meissen porcelain factory in 1743. Examples of this model survive as part of two impressive porcelain Crucifixion groups at the Staatliche Kunstsammlungen in Dresden (commissioned that year by the Dresden Court Hotel) and the Palace Church in Lauchhammer-West. Our corpus also shares analogies with another fruitwood corpus, twice-its-scale, attributed to a sculptor active in the circle of Permoser (Sothebys sale, 8 December 2009, Lot 71). The hulking upper chest situated atop a thinly cinched waist with idiosyncratic brows delineated by angled strokes forming an arrow-like pattern, suggest the possibility of a shared authorship between the two corpora, with the present corpus indicative of a younger stage in the sculptors career and the latter, a more advanced stage, perhaps by span of a decade or more, unless the present corpus alternatively is instead inspired by the work of a master.

Notably, Kändler is recognized as facilitating Permoser’s influence into the later 18th century by way of his tutelage under Dresden’s other court sculptor, Johann Benjamin Thomae, who himself had been hired by Permoser to assist with the palatial decorations at Zwinger from 1712. By 1731, at the age of twenty-five, Kändler’s talents procured him the appointment of court sculptor by Augustus II. Kändler immediately began producing models for the Meissen porcelain factory, of whom his teacher Thomae and Permoser alike, had enjoyed previous employment. Kändler quickly became the Meissen factory’s model-master in 1733 and remained with the factory until his death in 1775. Kändler’s work with Meissen made him famous in the courts of Europe for his innovative models, ingenious designs and is today considered the most important proponent in Europe’s history of porcelain production.

While it would seem unlikely to consider such an arresting and brutal portrayal of Christ, as suggested by our present corpus, could come from a sculptor better known for his elaborate animals, cute dogs, and rococo figurines of dancing harlequins and jovial figure-groups inspired by Commedia dell'Arte, Kändler’s origins were in consort with others of his trade prior to the advent of widespread porcelain production in Europe. Particularly, as the son of a pastor, Kändler may have been keen to work in the decoration of religious institutions or on behalf of religious patrons who were the frequent commissioners of sculpture apart from nobility.

Although Kändler remained active with his work at Meissen he also completed other commissions outside the factory during his early career, noted by an epitaph he created in 1736 for Maria Rebekka Schlegel and another in 1738 for Alexander Miltitz, both located at the Meissen Stadtmuseum. These works are rarely discussed yet remain his only autographed sculptures apart from a single late Meissen porcelain allegorical figure-group completed toward the end of his career on commission for Tsarina Catherine II for the Palais Oranienbaum near St. Petersburg.

Distinctive features link our corpus with Kändler’s Meissen corpus and with the figure of Father Time on his Schlegel epitaph. The unusually thick, raised veins featured on Kändler’s figure of Father Time correspond with those featured on our corpus, branching wildly with a pulsing vitality uncharacteristic of the work of other regional sculptors of the period while drawing a potent influence from Permoser.

The spear wound on Christ’s side, shaped like eyelids spewing forth worm-like drops-of-blood, are distinct and uniform on both corpora. Further analogies are observed in the arched rib cage forming a sharp upward point toward the sternum, flanked above by the sinuous tension of muscle pulled across the upper chest. The rib cage is likewise delineated by a series of bulbous muscles skirted by subtly raised obliques that rise toward the pit-of-the-arms. Although the waist is more emaciated, and the lower rib cage more dramatically sunken on our corpus, the profile of both corpora are identical in their slender depiction of Christ.

A similar energy is also observed in the wind-swept perizonium of each corpus and their management of folds and flares while their border along the curve of the lower abdomen, just below the arcuate line, is a frequent feature observed in other works by Kändler. Further correspondences are observed in the features of Christ’s face, with his straight nose, thin bridge, slightly agape mouth, bulbous eyes set deep in their sockets, suave curvature of the eyelids, distinct manner in which the ears are modeled and the style in which the hair is rendered.

The closed eyes of our corpus recall those observed on Kändler’s figure of St. Franz Xaverius in the elaborate figure-group portraying the saint’s death, probably made for the Queen of Poland, Maria Josepha, ca. 1738-40 (Meissen inv. PE 424). A similar pathos in Christ’s expression is also observed in Kändler’s figure of St. Francis, made for an unidentified Roman client in late 1747 (Meissen inv. PE 3770). The anatomical features of our corpus are echoed in a quantity of Meissen figures produced by Kändler during the 1730s-40s and our corpus may relate in subject-and-manner to some of the earliest models of saints he produced for the factory like those originally prepared for an altar set commissioned by Augustus III as a gift for Pope Clement XI’s nephew, Cardinal Annibale Albani, in 1735.

In consideration of the dating of these early models, as well as Kändler’s signed Schlegel epitaph of 1736, our sculpture likely dates to the early 1730s or potentially earlier. A particular distinction of our corpus is the presence of certain naïve qualities suggestive of an early work by the sculptor’s hand. This includes the choice lack of veins running along the upper thighs or the overabundance of veins along the neck. The supremely narrow waist supporting a larger upper body is almost over-dramatized while the head seems out-of-proportion with the remainder of the sculpture. Additionally, the bridge of the nose is rendered slightly too thin, yet there is still a technical virtuosity revealing a promising talent in the sculpture’s realization. It is reasonable to consider the corpus may have been made while Kändler was apprenticed to Thomae during his early 20’s or perhaps in the first years of his appointment as court sculptor after 1731. Some features of our corpus may prefigure those present on his 1736 figure of Father Time and his Meissen corpus of 1743, the latter of which clearly displays an increased refinement that must have depended upon the execution of earlier efforts like our present corpus.

A context for our corpus finds itself in the Saxon Elector whose requisite dedication to the Catholic faith prompted an ongoing need to edify his religious commitments to the Polish nobility. A quantity of devotional objects for the Dresden court were produced for church dignitaries and Catholic nobles, predicating an environment in which our corpus would have been reasonably commissioned.

The value of our corpus resides in its expressive quality, uniqueness and its indication of Kändler’s burgeoning talent which would later sweep the courts of Europe with a passion for porcelain figures rivaled only by Kändler’s own artistic determination to realize the highest potentials of the medium.

The retiring torsion of our Christ’s body, the strain suggested by his bulging veins, visceral side-wound and unsettling features juxtaposed against his transcendent resignation, altogether culminate in a striking drama in small-scale. A suitable object for the private devotee of the era and potentially a work of cultural significance anticipating the talent which would win Kändler’s court appointment, our corpus is as dramatically spirited as the porcelains that adorned the table settings and display cabinets of Europe’s nobility throughout the Rococo.

Condition:. The proper-left arm is a later replacement. Two of the right-hand fingers are replacements while three of the original digits have been reattached. An old fissure running down the back of the corpus terminates along the reverse of the proper-right thigh, suggesting the sculpture almost split into two-pieces but has been rescued. It is undetermined whether this split was due to an extreme or sudden loss of moisture resulting in cracking or due to a fall the corpus may have once suffered or during an attempt to remove it from a contemporary cross (the cross accompanying this corpus was a later replacement). There appears to be minor in-filling along the most severe area of the crack to help stabilize and restore the corpus. The attention given to the recreation of the proper-left arm and other restorations indicate the corpus must have been regarded or esteemed by a former owner. The gilding of the perizonium appears original, although with minor wear, and is commensurate with the period. The corpus once featured a crown-of-thorns, indicated by four holes to secure it along the circumference of the head. It would have probably been stylistically close to the crown-of-thorns featured on Kändler’s Meissen corpus of 1743. There is a minor chip or loss to the edge of the perizonium, along Christ’s proper-right hip, due to the fissure already discussed and the braided cord of the perizonium, originally open-worked and stretching along the lower abdomen is lost. Another minor chip is featured along the underside of Christ’s proper-left heel. In spite of these flaws, the corpus predominantly retains its original appearance and is in a condition generally commensurate with its age.