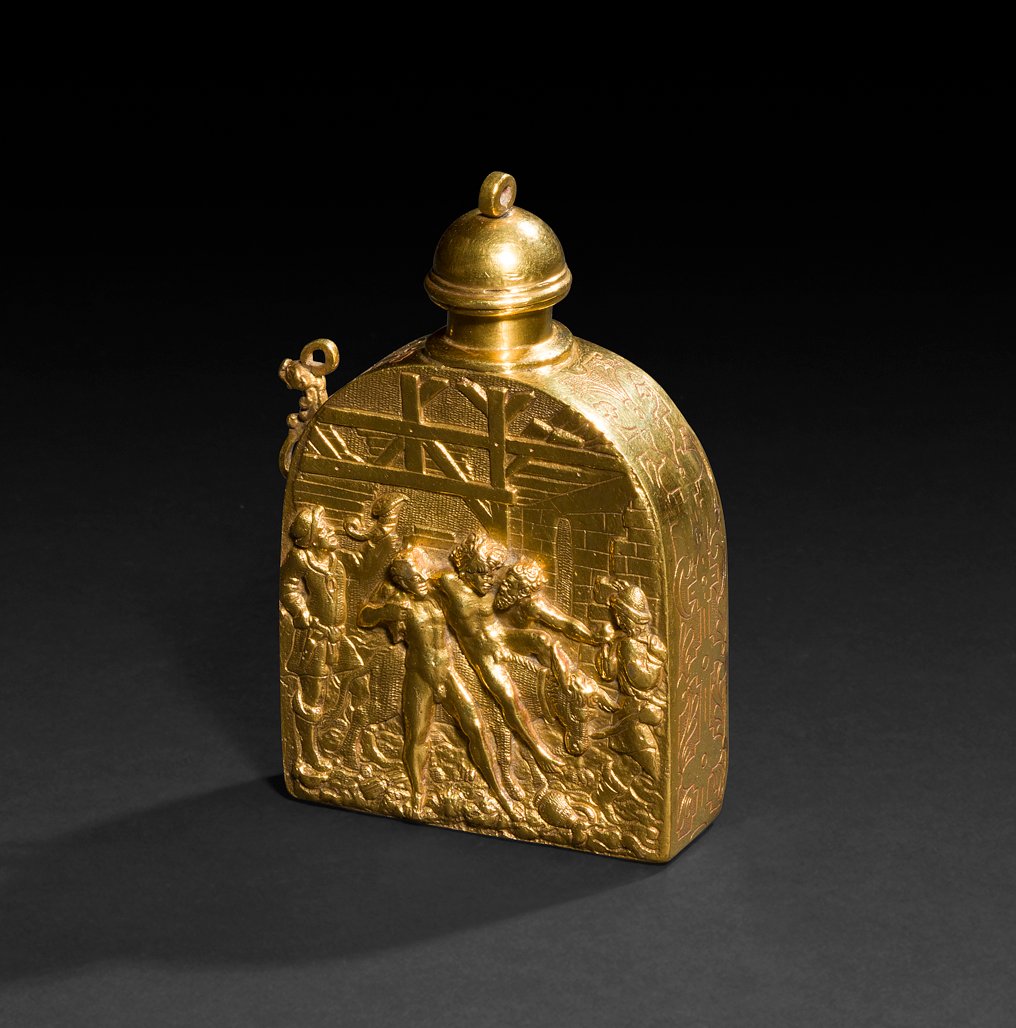 The present object is a discovery which sheds light upon a quantity of small relief plaquettes found in various museum and private collections of a series of Bacchic scenes. The series includes six metaphorical subjects depicting Bacchus in the company of specific animals thought to represent the humours or the functions of the body responsible for human behavior. In particular, the theme has its origins in the "Discovery of the Vine" from the Gesta Romanorum of the Middle Ages.

The numerous plaquettes reproducing the series in bronze and lead suggest they were intended as goldsmith models and are squared, featuring the main relief with an unexplained arched-top. The present flask indicates and explains their original function and is the only known example placing these small reliefs in their original context.

The past century-and-a-half of scholarship concerning this Bacchic series of reliefs all attribute them to the mid-16th century with a close association to the celebrated Nuremberg sculptor, designer, printmaker and goldsmith: Peter Flötner. While an attribution cannot decisively be proven, their manner posits a very close association with the artist.

There are other characteristics which bring the series of reliefs in close proximity with Flötner, for example, the influence of the Gesta Romanorum, previously noted, as well as a poem by Hans Sachs which treats the same subject as the reliefs. Flötner designed broadsheets incorporating verses from Sachs in other of his successful designs. The engraved pattern along the edges of our flask also relate to Flötner's ornamental prints. Lastly, it has been suggested that lead casts from the series, belonging to the Amerbach collection in Basel (inventoried in 1585-87), may form some of the many lead plaquettes described in that early collection as works by Flötner.

The exceptional attention to detail, texture and finishing of the reliefs on our flask certainly point to the virtuoso goldsmith skills of mid-16th century Nuremberg. This is precisely the kind of product a goldsmith shop would have produced using models (in lead, stone or wood) furnished by a sculptor like Flötner and intended for a nobleman of mid-to-upper class stature.