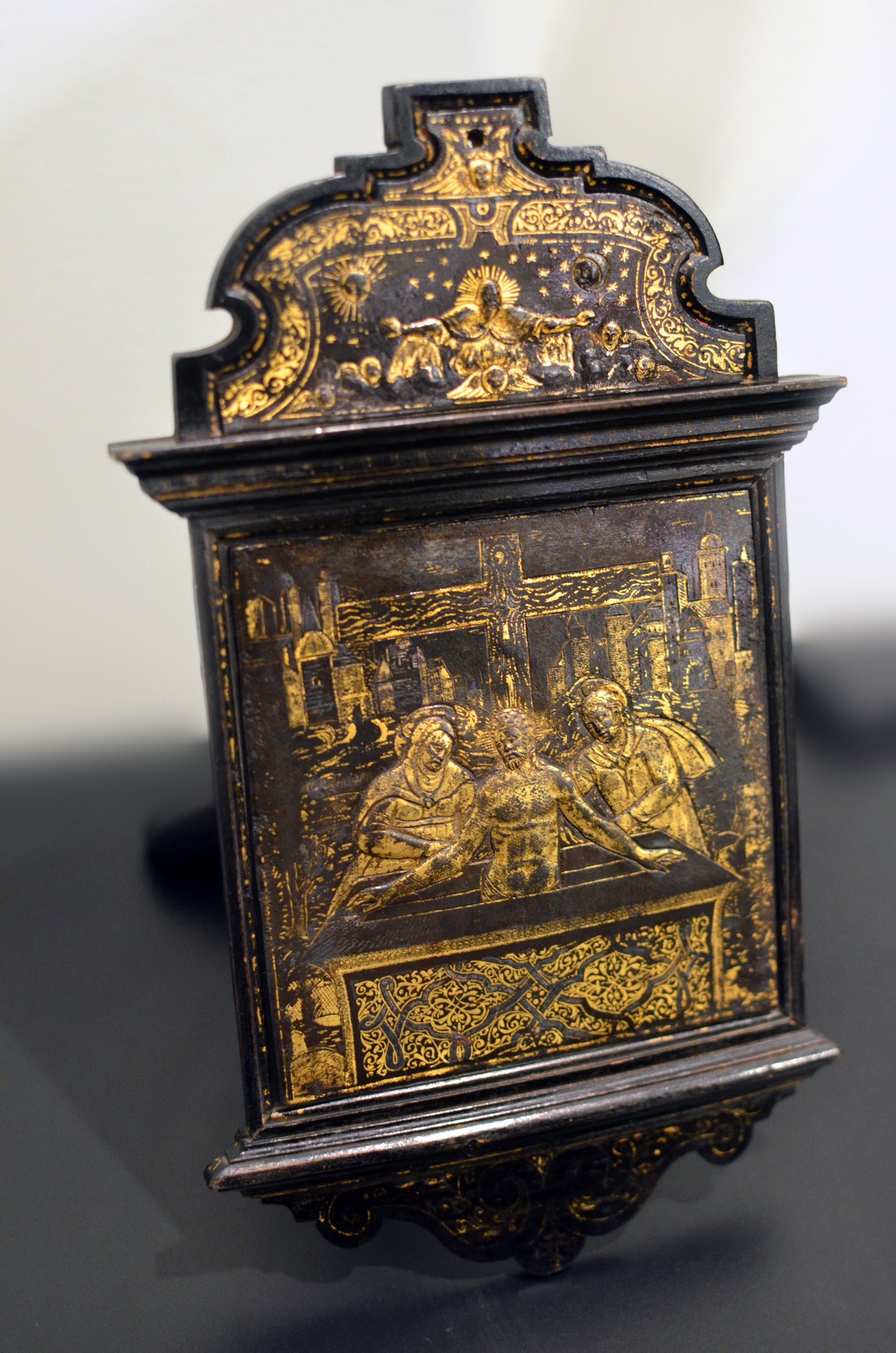 The present pax bears an important French pedigree descending from the collection of Edmond Bonnaffée. Bonnaffée was instrumental in cataloging the important objects belonging to the 19th century collector and dealer Frédéric Spitzer, whose vast holdings now form important portions of Renaissance and Medieval decorative arts in museum collections throughout Europe and America. While owned by Bonnaffée, the present pax was featured in one of the earliest modern surveys on the history of furniture, reproduced and discussed by former Louvre curator, Albert Jacquemart, in his now classic: “A History of Furniture: Research and Notes on the Art Objects that can Compose the Furnishings and Collections of the Man of the World and of the Curious,” published posthumously in 1876. Before Bonnaffée, the pax was located at Château de Chambord, probably dispersed with other furniture and treasures in 1792, following the French Revolution. The Château is the largest in the Loire Valley and was the former extravagant hunting lodge of King Francis I.

Our pax represents a scarce and unique type of production emanating from specialists in Milan, Italy, adept in the creation of damascened steel armor and weapons whose work was uniquely celebrated and in high-demand all throughout 16th century Europe. The Milanese workshop of Giovanni Battista Panzeri in 1559, for example, produced the elaborate parade armor of Ferdinand II, Archduke of Further Austria and son of the Holy Roman Emperor, now kept at the Kunsthistorisches and today considered the zenith of historic armor making.

Although chiefly celebrated for their production in the arms trade, these skilled Milanese craftsmen also less commonly made exquisite furniture, especially small cabinets, desks, and other precious objects tailored to the tastes of wealthy patrons desiring one-of-a-kind masterworks epitomizing exclusivity and luxury. To offer perspective, a tabernacle commissioned by Ferdinand II, from Giovan Antonio Polacini and Marco Antonio Fava in 1576, was completed at the price of 2,000 florins, nearly the cost of a private Renaissance palace!

The outlier objects produced by these Milanese armorers were frequently embellished by wooden frameworks beset with low-relief, elaborate gold-and-silver damascened steel scenes of mythology and allegory. Additional embellishments, such as small statuary in fine metals, were also occasionally incorporated. Especially scarce to this eccentric genre were the production of devotional objects featuring religious subject matter. One travelling devotional altar in the form of a façade featuring God the Father in an arched tympanum with angels flanking variably throughout its design, is known by three identical examples and a reliquary tabernacle at Spain’s El Escorial (Monastery of San Lorenzo) is an especially impressive treasure which may be considered a masterpiece of the genre, all very likely the work of Panzeri and his workshop. Of these few examples, notwithstanding the now dismantled, lost tabernacle once made for Ferdinand II, only a few examples of this kind exist depicting devotional subjects. Of note are a plaque-relief in a private UK collection which would have probably formed one of the interior panels for a tabernacle, a plaquette, similar to our own and also featuring a scene of Christ being raised from the tomb by angels, at the Museo Nazionale del Bargello (Inv. 739) and another cruder applique of the same subject, kept at the Metropolitan Museum of Art (Inv. 29.158.425). The MET and Bargello examples, like our own, would have originally been incorporated into a steel-framed devotional pax, only one of which survives fully preserved at the Museo Poldi-Pezzoli in Milan (Inv. Oreficerie 223). This pax is similar to our own, sans the original frame, with its added, separately prepared tympanum relief surmounting a frame with a central relief, in the typical form for 16th century Renaissance paxes.

The Poldi-Pezzoli pax is very close to the sculptural relief-embossing style of Giovanni Battista Panzeri and may be the only pax referenced in surviving documents concerning the genre. In late 1557 and early 1558 Panzeri continued a business partnership with the damascener, Marco Antonio Fava, intending to pool their credits, debts and inventory. In 1560 this collaboration was renewed for another three years, providing an inventory of objects in their workshop, notably inclusive of a “small pax,” just started, at the exuberant cost of 200 lire.

It is worth noting that all four surviving pax reliefs, inclusive of our own, feature the same motif of Christ raised from the tomb by angels, suggesting a shared model was circulated among the few craftsman dedicated to this art. The varying sculptural quality and damascened technique among them infers the employ of different workshop assistants. Documents mention the occasional outsourcing of embossing and damascening to a minority of skilled craftsman like the damasceners “Master Anselmo” and the “Flemish Master Giovanni,” and while Panzeri is practically the exclusive producer of devotional-themed objects-of-this-type, it is unlikely he worked directly on our present relief, based on stylistic-grounds.

While our pax stylistically diverges from the relief work typical of Panzeri, it remains possible other assistants could have been given the work or perhaps an assistant in Polacini’s equally prolific workshop, as both Panzeri and Polacini were the two chief masters of the arms trade in production of decorative works of this kind.

Stylistically, our pax is almost certainly by the same embosser responsible for a cabinet at the Museo Poldi-Pezzoli (Inv. 415), judged ca. 1570, and conjectured to be from Panzeri’s workshop. Its wood housing is an 1865 replacement by Giuseppe Speluzzi but its damascened plaques and appliques, depicting columns in the form of caryatids, feature the same low-profile relief figures and similarly gilded bodies along with a dependency on heavily-chased and engraved afterwork as observed on our pax. There is also a preference for uneven thick, short strokes to delineate ground and a preferred articulation of faces in three-quarter perspective with simplistically realized putto and solar faces. The ornamental pattern-work on the cabinet also favorably corresponds with the treatment of our pax. These characteristics may also suggest an embosser in Panzeri’s workshop who may have been involved in the production of the relief plates depicting biblical scenes along the exterior of the El Escorial tabernacle. The interior reliefs of the tabernacle are by a more able-hand, possibly Panzeri himself, with some assistance, while the exterior panels may be the work of one or more studio assistants, potentially inclusive of our author.

The technique of embossing and damascening steel was an intensively laborious task. The steel would be heated and cooled, in this case, also blackened, and worked in repoussé. This was a challenging and patient process and the damascening was equally demanding with the careful carving and chasing of hatched channels into the steel followed by the hammering of precious inlay gold or silver into the cavities without use of adhesive. This method is called overlay damascening and the overall result is with dramatic effect.

The present pax, though lacking its original frame, remains an extraordinarily scarce example of devotional art in the ambit of Milanese armor-making, executed during a period in which the art-form was representative of the finest craftsmanship of the era, and still regarded as such today. Its rare survival and illustrious provenance secure its desirable and unique position for any serious collection.