A Renaissance bronze pax from the Circle of Francisco de Alfaro 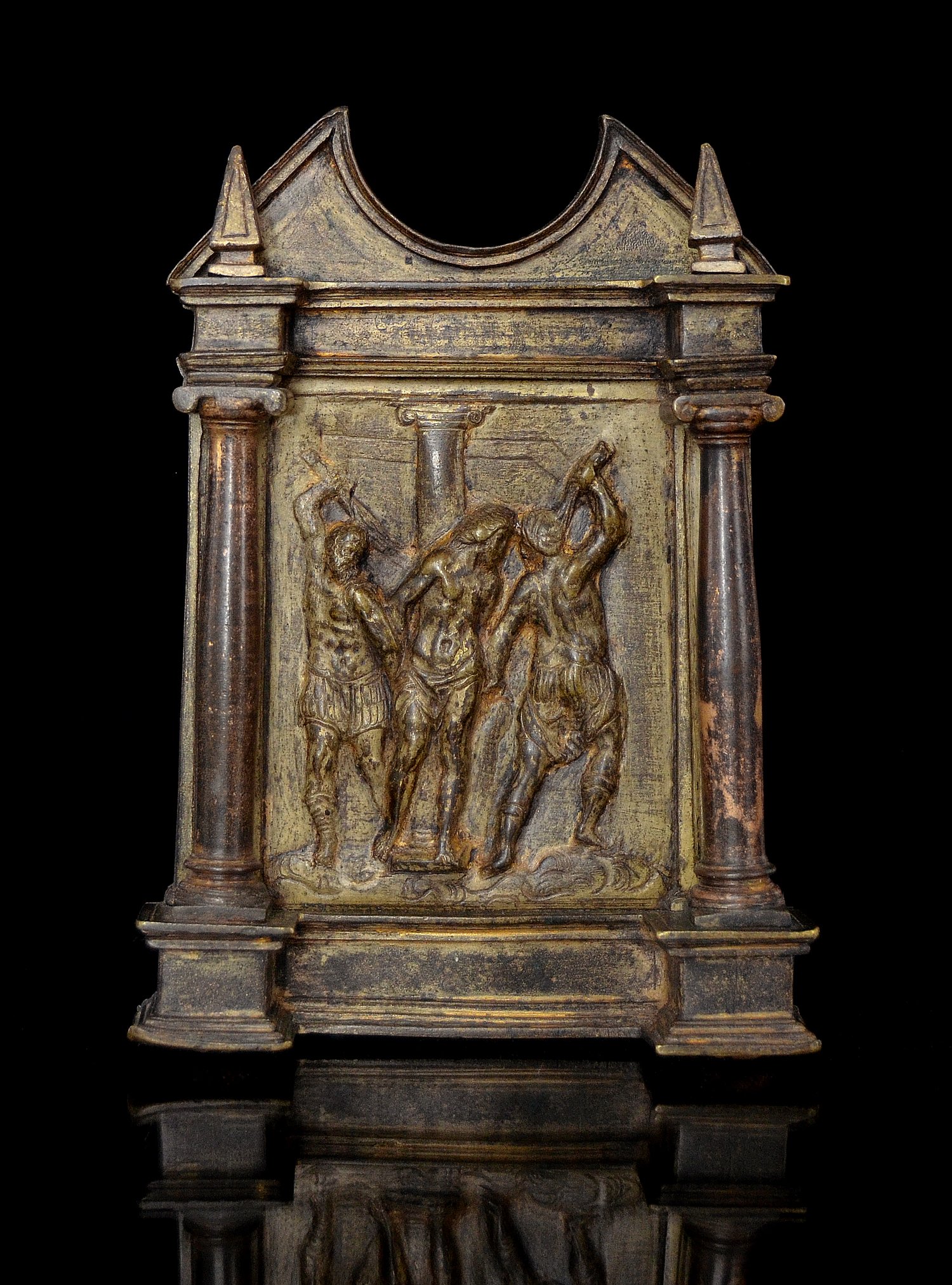 Condition: Contemporary cast. Light greenish brown patina with trace amounts of gilding present on the obverse . Possible chasing on the surface of the relief and other details. Reverse engraved. Handle lacking with traces of former attachment. Two ungalvanized replacement screws along underside of the base that have unfortunately rusted shut.

Paxes were small objects held-in-hand and kissed by the congregation during ceremonies. They were often made by local craftsman for regional churches or commissioned by wealthy patrons as donations to important churches throughout Europe. They were popularly used up until the mid-to-late 17th century.

The present pax features a small relief of the Flagellation loosely following after Sebastiano del Piombo’s (1485-1547) fresco of the Flagellation of Christ, ca. 1516-24, in St. Peter’s Basilica in Rome. The subject, whose design was provided to Piombo by Michelangelo (1475-1564), was widely successful and can be found frequently reproduced in small relief on numerous devotional objects created in Spain during the 16th and 17th centuries.

The architectural features of the pax frame and engraved motif on its reverse places it in close association with the work of Francisco de Alfaro and his father, Diego, who were active in Seville and Cordoba, ca. 1565-1610. The present pax is probably the work of an early 17th century follower of the Alfaro workshop or an associate.

A pax at the Church of St. Mary Magdalene in Arahal, made by Francisco in 1598-99, shares several characteristics with the present pax. Its protruding square plinths supporting plain columns topped by horizontally pinched ionic capitals terminating in pyramidal spires are related. The general structure and method of assembly for both paxes also correspond and might indicate the copying or sharing of fabrication concepts between the maker of this pax and the Alfaro family workshop.

Further correspondences with Francisco Alfaro’s influence can be observed in the pax-like embellishments he added to the knots of monstrance and processional cross stems such as one at the Church of St. Maria de Carmona in Seville, again sharing the same architectural treatments.

Apart from its commanding architectural presence the highlight of this pax is its reverse which exhibits an elaborately engraved cartouche design. The motif is a bit too progressive to be reliably connected with the period of activity which concerns the Alfaro family and certainly the obverse of the pax is too crude to be connected with Francisco’s graceful, albeit modest reliefs, therefore suggesting the present pax belongs to another hand and a slightly later date.