A rare and important painted bronze Crucifix, after a model by Michelangelo 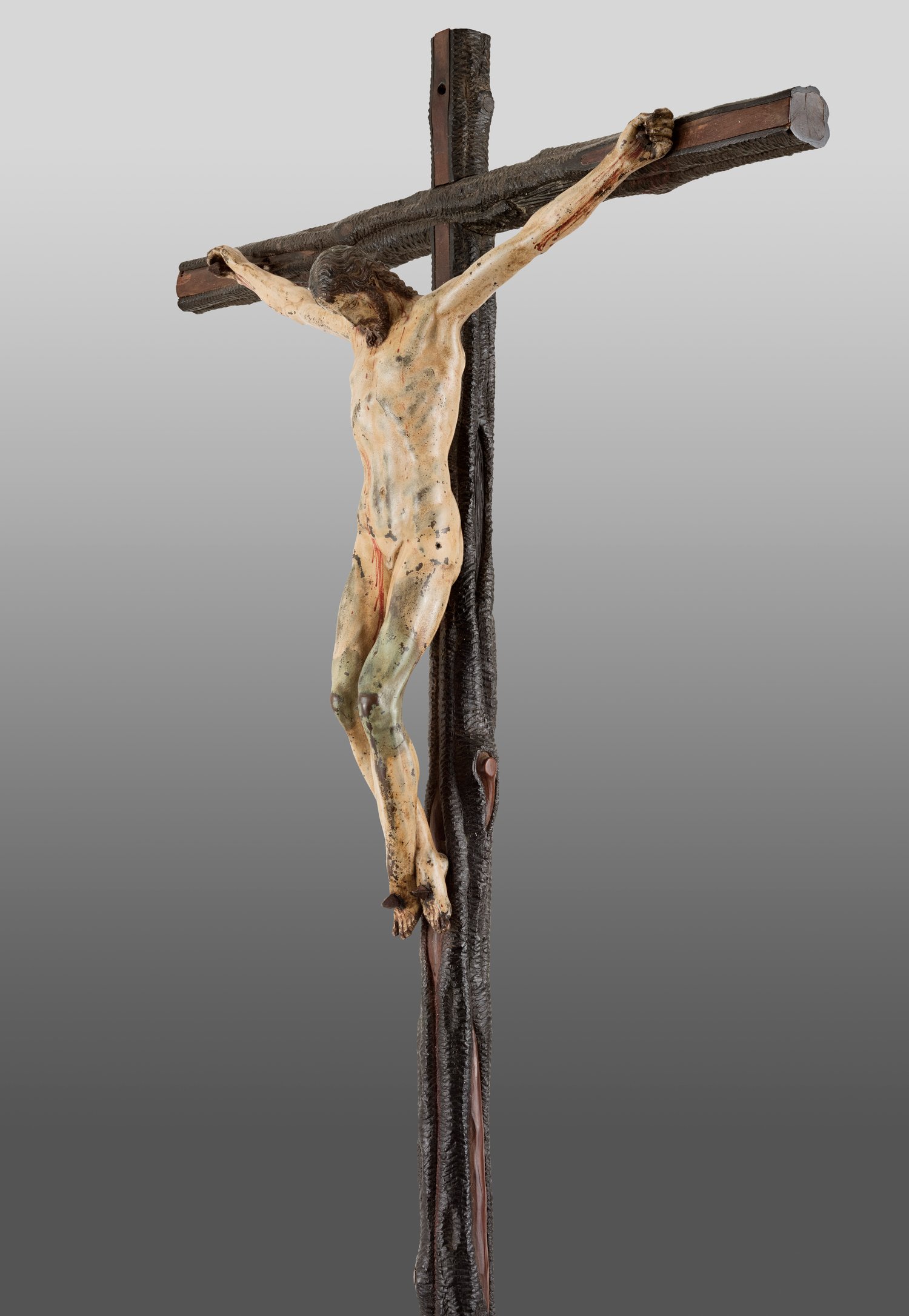 A rare and very fine bronze corpus of Christ after a model by Michelangelo, cast ca. 1597-1600 by Juan Bautista Franconio and painted in 1600 by Francisco Pacheco in Seville, Spain.

The present corpus reproduces a model attributed to Michelangelo. The best known example, lesser in quality, is one on display at the Metropolitan Museum of Art (MET).

The association of this corpus with Michelangelo was first brought to light by Manuel Gomez-Moreno (1930-33) who studied the wider circulated casts identified throughout Spain. The attribution to Michelangelo was subsequently followed by John Goldsmith-Phillips (1937) of the MET and again by Michelangelo expert, Charles de Tolnay (1960).

While Michelangelo is best known for his monumental works, there are four documented crucifixes he made. The best known example is the large-scale wooden crucifix for the Church of Santa Maria del Santo Spirito in Florence, made in 1492 as a gift for the Prior, Giovanni di Lap Bicchiellini, for allowing him to study the anatomy of corpses at the hospital there. In 1562, Michelangelo wrote two letters to his nephew, Lionardo, indicating his intention to carve a wooden crucifix for him. In 1563 a letter between Lionardo and the Italian sculptor Tiberio Calcagni, mentions this same crucifix (a sketch of a corpus on the verso of a sheet depicting Michelangelo’s designs for St. Peter’s Basillica [Palais des Beaux-Arts in Lille] may reproduce this). That Michelangelo was working on small corpora in the last years of his life is further evidenced by the small (26.5 cm) unfinished wooden crucifix located at the Casa Buonarroti, considered his last known sculptural undertaking. Michelangelo’s contemporary biographer, Giorgio Vasari additionally cites that Michelangelo, in his later years, made a small crucifix for his friend, Menighella, as a gift.

Surviving sketches also indicate Michelangelo’s study of this subject throughout his career, most notably during the end of his life but also during the 1530s-40s as he deepened his spiritual roots. The occasional cameo of crucified Christ’s throughout his sketched oeuvre have made it challenging for scholars to link such sketches to any documented commissions of importance. All the while, in consideration that such objects were made as gifts, it is unlikely they should be linked with commissions.

Nonetheless, a number of theories concerning Michelangelo’s sketches of Christ crucified have been proposed and some may regard the origin of the present sculpture. It has been suggested that the corpus could have its impetus with Michelangelo’s work on the Medici Chapel, whose exclusive design was given to the master. It is sensible smaller details, like an altar cross, could have fallen under his responsibility (see for example British Museum, Inv. 1859,0625.552). Others have noted the possibility of an unrealized large marble Crucifixion group which never came to fruition but whose marble blocks had been measured according to a sheet at the Casa Buonarroti.

A unique suggestion is that Michelangelo could have made the crucifix for Vittoria Colonna, of whom he was exceedingly fond and with whom he exchanged gifts along with mutual spiritual proclivities. In particular, Vittoria had an interest in the life of St. Bridget, whose vision of Christ closely resembles our sculpture, most notably with Christ’s proper-left leg and foot crossed over his right, an iconography that is incredibly scarce for crucifixes. The suggestion could add sense to Benedetto Varchi’s comment that Michelangelo made a sculpted “nude Christ…he gave to the most divine Marchesa of Pescara (Vittoria Colonna).”

Of that same period, two sketches can be visually linked to our sculpture. Tolnay relates it to a sketch of a Crucified Christ at the Teylers Museum (Inv. A034) of which Paul Joannides comments on its quality as suggestive of preparations for a sculptural work. Joannides also calls attention to a related drawing attributed to Raffaello da Montelupo copying what is believed to be a lost sketch by Michelangelo. Its relationship with our sculpture is apparent. Montelupo, a pupil of Michelangelo’s, returned to Rome to serve him in 1541, assisting with the continued work on the tomb of Pope Julius II, suggesting again an origin for the corpus ca. 1540.

The earliest firm date that can be given to the present corpus is 1574 where it appears as a rather crudely conceived Crucifixion panel, flanked by two mourners in low-relief and integrally cast for use as the bronze tabernacle door to a ciborium now located at the Church of San Lorenzo in Padula. Etched in wax residue on the back of the door is the date, 27 January 1574, indicating the corpus would have at least been available as a model by late 1573.

The impetus for the Padula tabernacle’s Crucifixion panel begins with a series of late Crucifixion sketches by Michelangelo, depicting a scene of Christ crucified and flanked by two mourners (see British Museum Inv. 1895.0915.510; Ashmolean Museum Inv. 1846.89, KP II 343 recto; Windsor Castle RCIN 912761 recto; and Louvre Inv. 700). A faintly traced block possibly intended for sculpting the sketch of the crucified Christ on its recto was discovered by Tolnay on a version of the composition at Windsor Castle. The Windsor sketch and those related to it appear to have served as preparatory designs for what was probably intended to become the Basilica of St. Mary’s tabernacle door. Vasari documents that the project was to be designed by Michelangelo and cast by his assistant, Jacopo del Duca. Michelangelo died before the commission was complete, though on 15 March 1565, Jacopo writes to Michelangelo’s nephew stating, “I have started making the bronze tabernacle, depending on the model of his that was in Rome, already almost half complete.” Various circumstances interrupted the completion of the tabernacle, though its concept is later revitalized by Jacopo during preparations to sell a tabernacle, after Michelangelo’s designs, to Spain for Madrid’s El Escorial almost a decade later. The El Escorial tabernacle likewise encountered problems and was aborted but Jacopo successfully sold it shortly thereafter to the Carthusians of Padula.

An etched date, 30 May 1572, along the base of the Padula tabernacle indicates its framework was already cast by then. A 1573 summary of the tabernacle also describes the original format for the door and relief panels, intended to be square in dimension. However, a last minute decision to heighten them was abruptly made during Jacopo’s negotiations to sell the tabernacle to King Phillip II of Spain. Shortly thereafter the commission was aborted. Philippe Malgouyres notes that the Padula tabernacle’s final state is a mixed product of the original design intended for Spain’s El Escorial, recycling various parts that had already been cast and adding new quickly finished elements for its sale to Padula, explaining its unusually discordant quality, particularly as concerns the crudeness of the door and relief panels which were clearly made later (by January 1574).

Apart from his own admission in letters to Spain, it is apparent, however, that Jacopo relied upon his deceased master’s designs while hastily realizing the Padula panels. If Michelangelo had already earlier conceived a crucifix model, and Jacopo had access to that model, its logical he could have hastily employed it for incorporation on the door panel to the tabernacle. It is worth noting some modifications he made to the model, extending Christ’s arms further up in order to fit them into the scale of the panel and further lowering his chin to his chest in order to instill physiognomic congruence. A crude panel of the Deposition also follows after Michelangelo’s late sketches and is likewise known by examples thought to be modifications by Jacopo based upon Michelangelo’s initial sculptural conception (see Malgouyres: La Deposition du Christ de Jacopo del Duca, chef-d’oeuvre posthume de Michel-Ange).

Jacopo’s appropriation of an original model by Michelangelo for more than one relief on the Padula tabernacle adds further indication that the crucifix was not an object unique to Jacopo’s hand, as few scholars have posited, but rather belongs to Michelangelo’s original invention. In observing the MET corpus and its relationship to the Padula Crucifixion panel, Phillips commented, “the crucified figure of Christ in the relief is so noble that it would be unreasonable to attribute its conception alone to Jacopo, who himself admitted that he was ‘under the shadow of the master.’”

Constituting another early documented record for our corpus is the mention of it by the Spanish painter Francisco Pacheco (1564‒1644) who cited it in his book, Arte de la Pintura, completed in 1638 and published posthumously in 1649. In Pacheco’s manuscript the corpus is already assigned to Michelangelo just 33 years after his death. Pacheco records that a bronze crucifix by Michelangelo was brought to Seville from Rome by the silversmith Juan Bautista Franconio in 1597. Pacheco further documents that on 17 January 1600 he painted a bronze aftercast of the sculpture, prepared by Franconio.

Javier Moya Morales notes the linguistic tense used by Pacheco indicates he painted more than one bronze crucifix, suggesting that several first generation casts were made after the example Franconio brought from Rome. Two identified casts are indicative of this record, our example offered here, and another located at the Grand Ducal Palace of Gandia in Spain. An additional painted cast at the Cuenca Cathedral, though silver, also belongs to this rare group of casts made by Franconio and painted by Pacheco. The wooden crosses accompanying our corpus and the Cuenca cathedral cast follow the type common to Seville around the year 1600 and could have been executed by Pacheco’s regular collaborator of sculpted works, Juan Martinez Montañés’ whose wooden masterpiece, the Christ of the Clemency, Pacheco notes was influenced by this corpus.

In addition to the painted casts, several silver casts of remarkable quality are likewise associated with Franconio’s reproduction of the corpus he brought from Rome. They include examples at the Seville Cathedral, Madrid Palace, Gomez-Moreno Museum and also probably an example belonging to the Valladolid Cathedral.

Confirming our sculpture was likely painted by Pacheco is Pacheco’s own admission that he used an example of the corpus he painted as a model for his 1614-15 painting of Christ on the Cross (Gomez-Moreno Museum). The tones of paint and location of blood on Pacheco’s painting corresponds remarkably with our corpus.

An additional confirmation comes by way of our sculpture’s reproduction in two paintings by Spain’s most successful Renaissance painter, Diego Velazquez. Velazquez was Pacheco’s pupil and son-in-law, and he reproduces a painted cast of the corpus in two portraits of the monastic, Jeronima, completed by him in 1620.

NOTE: Available for purchase in Italy only (Due to a notifica concerning its cultural importance, as adjudged by the Culture Ministry of Italy)