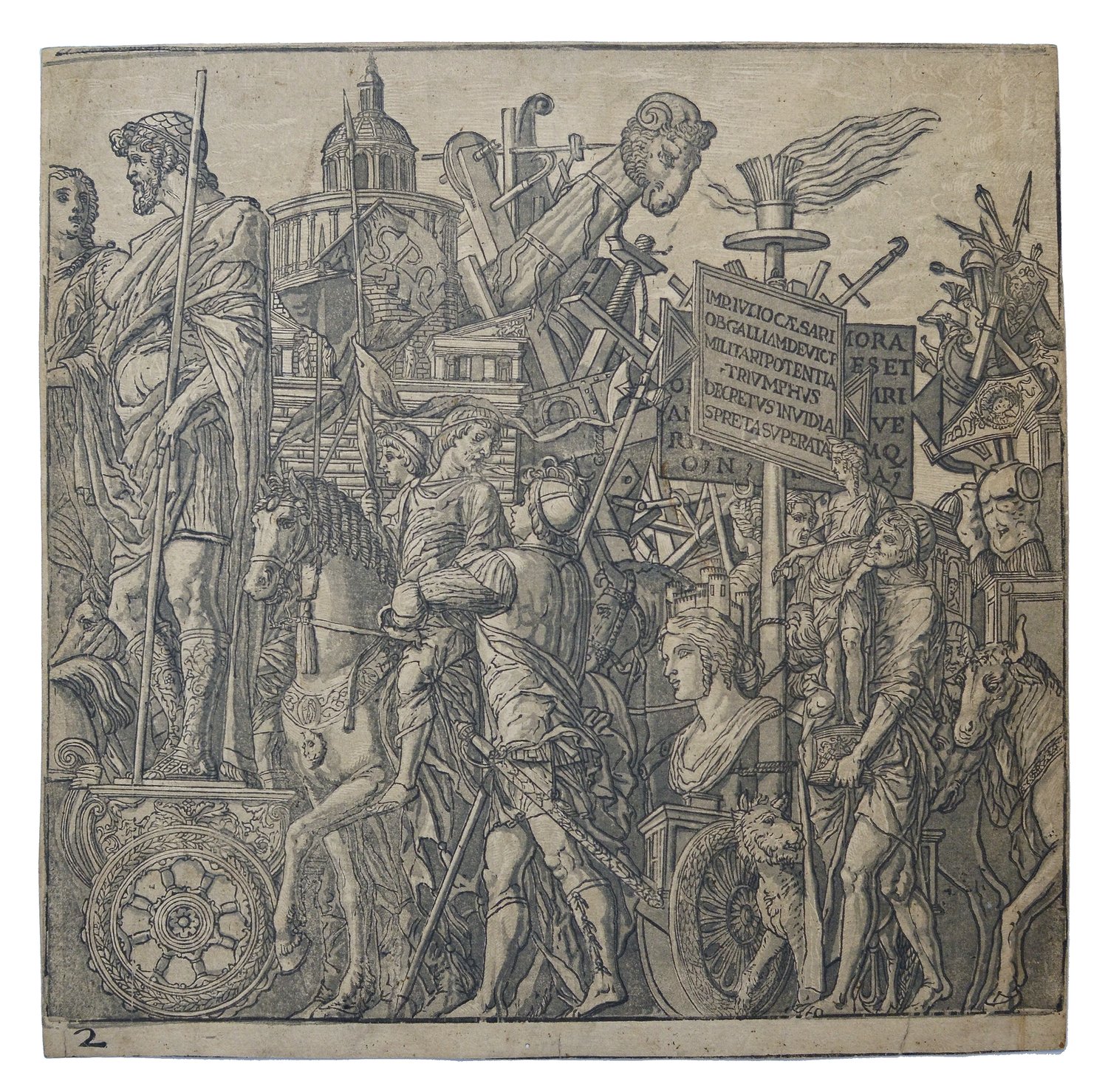 A pair of rare chiaroscuro woodcuts from the Triumph of Julius Caesar by Andrea Andreani, after Andrea Mantegna

Two chiaroscuro woodcuts printed on heavy laid linen paper, using four blocks. A scene of Julius Caesar printed in tones of yellow, beige, ochre and grey and a scene of a Triumphal Chariot in tones of grey-green ink.

The present woodcuts comprise sheets two and nine of an eleven-sheet sequence depicting the Triumphs of Caesar after Andrea Mantegna’s larger painted series once located in the Ducal Palace of San Sebastiano in Mantua. Our present sheets represent the panels portraying A Triumphal Chariot Surrounded by Figures on Horseback and Julius Caesar in his Horse-drawn Chariot.

Andrea Andreani was the foremost master of chiaroscuro woodblock printing during the last part of the 16th century. William Gilpin, in 1786, praised him as the “the great improver of the art of engraving upon wood.” He was arguably the first woodblock printer to borrow from sculpture and reliefs as his models, capitalizing on the visual heightening of form through color, in which chiaroscuro printing excelled, refining the medium in novel ways.

The present prints after Mantegna were financed by Duke Vincenzo I Gonzaga, as described in the dedication sheet that accompanies the series. A document of 1595 also cites Andreani’s receipt of thirty scudi “to publish and print the Triumph of Julius Caesar by Andrea Mantegna.” The original paintings by Mantegna had been commissioned earlier by the Duke’s grandfather, Francesco II Gonzaga, around 1485. The dedicatory sheet also notes Bernardo Malpizzi’s involvement in the development of Andreani’s prints, having furnished the reduced-scale drawings from which Andreani would refer for the cutting of the blocks. Malpizzi also assisted Andreani on other projects during this period of activity.

Andreani’s series after Mantegna are his last large-scale work and also the first collection of prints to reproduce a complete painted cycle. The entire project took four years to finish, requiring the production of forty-three individual woodblocks. The color scheme of the present group of sheets indicate they are early impressions. A fair quantity of prints from the series were produced and some were still present in the Duke Vincenzo’s collection, listed in his inventory of 1626.

As concerns the field of Old Master Prints, chiaroscuro prints are particularly rare. They are unique in their representation of the genesis of color printing.

Condition: Strong impressions leaving a slight relief on the verso of each sheet. Traces of age and wear with blemishes along the extreme margins. Old adhesive residues on the reverses from former mounting. The sheet of Caesar has been trimmed around the margins, lacking the exergue with the number 9. Overall, a pair of good quality contemporary impressions, handsomely displayed in modern frames.