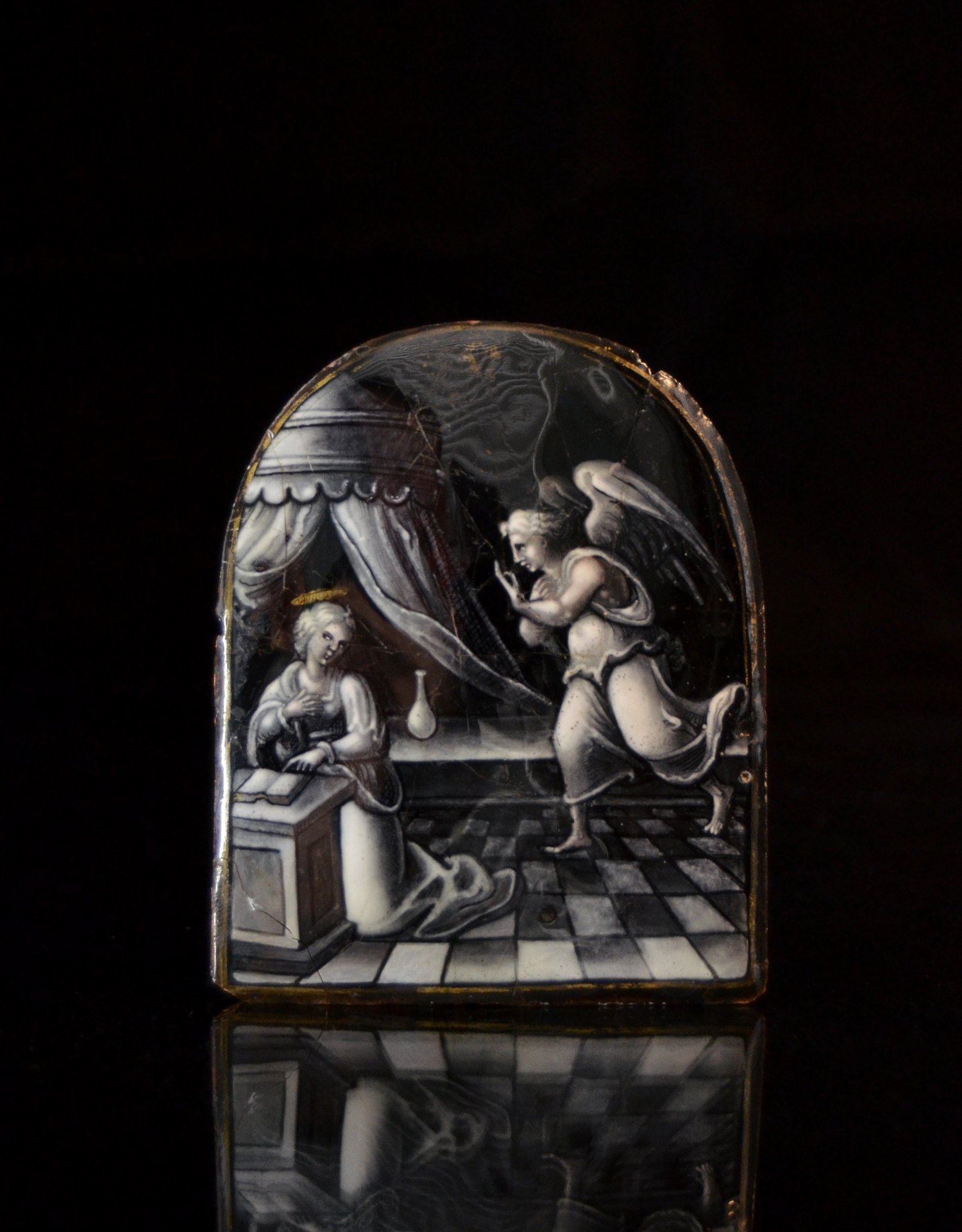 Upon first observation the present enamel could be broadly associated with Pierre Reymond, identified already as a maker of pax-shaped enamels in grisaille. Jean Penicaud II is another candidate whose grisaille works follow in a similar manner. However, the subtle design characteristics of the present enamel suggest it belongs to the hand or workshop of Martial Ydeux, an artist who Emile Molinier considered a possible assistant to Jean Penicaud II due to the close affinity of their works.

The influences of Reymond and Penicaud II appear generically translated on the present enamel though certain features are characteristic of Martial’s enamels, in particular, the thickly rendered strokes and the calculated, open spacing between them in hatched areas of the design. The rendering of Mary and Gabriel’s hair recall the manner of the former noted artists but lack their tonal range and sense of depth and is instead systematic and less free in its realization, like tense springs that have been released in a well-orchestrated pattern. The drapery is less complicated than the former artists and drips over the waistline, observed similarly on a medallion of The Rest on the Flight into Egypt attributed to Martial (Louvre, Inv. R286), a monogrammed medallion of Joshua from Martial’s series of nine champions (Musée national de la Renaissance in Ecouen), and on several figures on a monogrammed triptych of religious scenes at the British Museum (Inv. 1913,1220.74). The filled nimbus, outlined on its interior by a thin black stroke and delicately hatched, is also a characteristic observed on other enamels by Martial, including the aforementioned works and also on his monogrammed Crucifixion at the Louvre (Inv. OA11143).

Another feature is Ydeux’s greater transparency over the brown-mulberry used to color flesh tones, making the skin more vibrant and perhaps in league with the later works of Reymond and Penicaud II. The distinct eyes, tightly pinched, follow those seen on characters featured on the British Museum triptych. The present enamel may have been rendered in close proximity with the creation of the British Museum tabernacle given its focus on religious themes and similarity in style. Martial’s later works show great maturity and a remarkable control lacking in the present enamel, indicating a possible early work by the artist. The translucent enamel on the reverse is also typical to works associated with or monogrammed by Ydeux.