A gilt bronze pax from the Workshop of Guglielmo della Porta 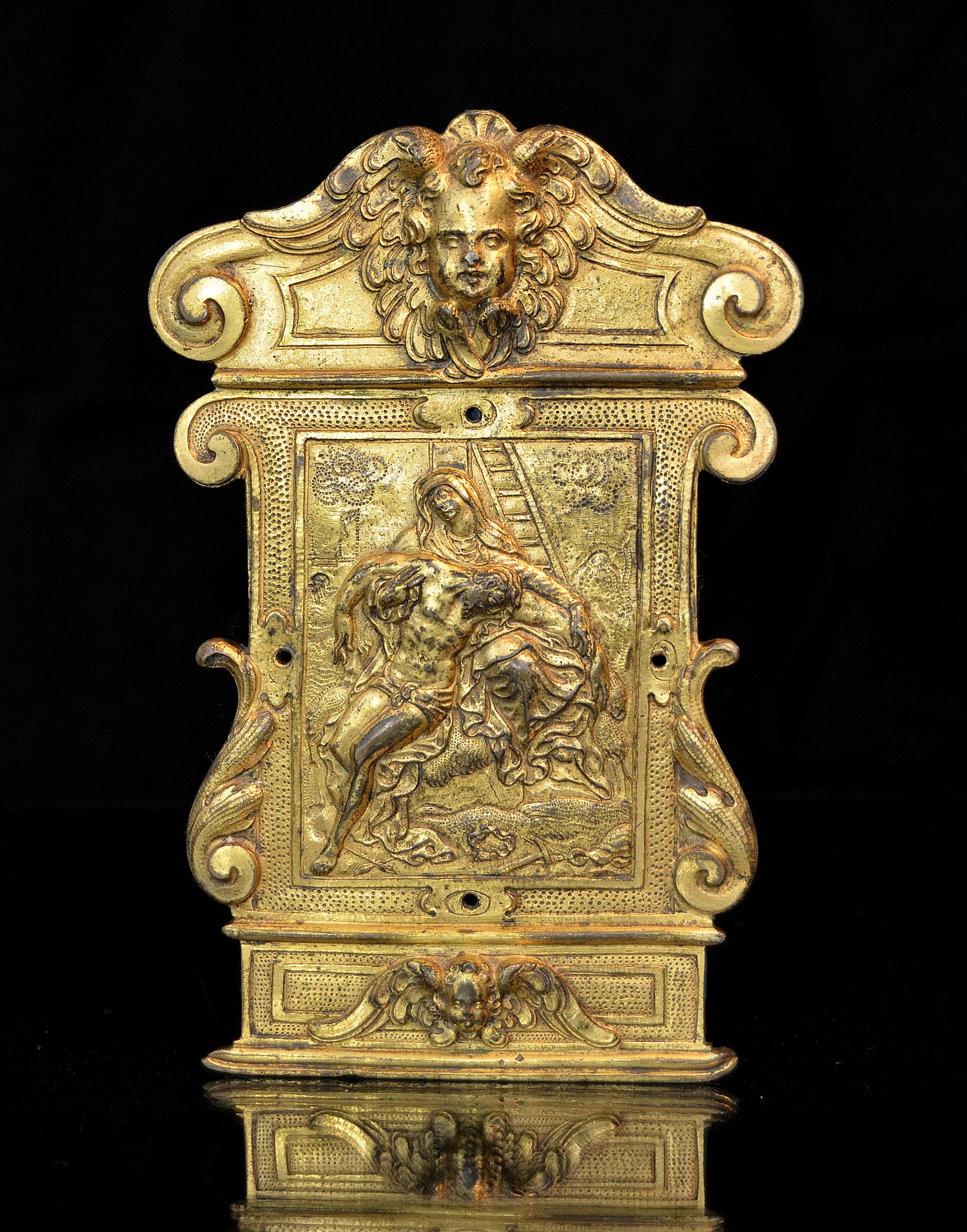 This gilt bronze pax depicting the Pieta is derived from a design by the Italian sculptor Guglielmo della Porta, a larger version of which, was modeled by his assistant Jacob Cornelis Cobaert in Rome around the year 1570. Giovanni Baglione’s 1642 publication of Cobaert's artistic career mentions a "Christ expired in the arms of the Virgin Mother, most beautiful.” The 1609 legal proceedings of Guglielmo's son also mention a “dead Christ in the arms of the Virgin” that Cobaert made using Guglielmo's designs. In those same documents Cobaert himself mentions a Pieta he modeled in clay while active in Guglielmo's workshop.

The Pieta was widely produced in Guglielmo's workshop. A gilt cast at the National Gallery of Art is the finest example of this production (Inv. 1989.57.1). The design became tremendously popular in Italy and abroad. Ulrich Middeldorf called it the “most famous sacred image in Europe around the year 1600," and this can be confirmed by the quantity of surviving copies cast in bronze and its reproduction in a variety of mediums.

Our contemporaneous smaller version of this design, cast integral with its pax frame is a rare production confidently attributed to the influential workshop of Guglielmo della Porta. An immediate relationship is observed in the fluid expressiveness of the characters, the finely rendered undulating drapery, as well as the modeling of Christ’s face which, though unfortunately rubbed due to wear, closely corresponds with the same features of Christ depicted on the small reliefs of the Flagellation (Victoria & Albert Museum) and Risen Christ (Metropolitan Museum of Art), attributed to Guglielmo and intended for use on paxes.

An additional correlation of the pax with Guglielmo’s workshop is the punched addition of an anthropomorphic sun and moon, uncommon in Italian art, but which appear on other works by Guglielmo such as his previously noted Mount Calvary relief or the panel for God’s Charity on the funeral monument for Paul III at St. Peter’s Cathedral.

The integral frame of the Pieta pax further connects it with Guglielmo’s workshop, in particular, his assistant Sebastiano Torrigiani, with its scrolling volutes and finely chiseled foliates precisely corresponding with the ornamentation featured on Torrigiani’s 1581 altar service commissioned by Pope Gregory XIII for the Sacristy of San Giacomo Maggiore. Especially commensurate are the winged cherub heads whose disposition represents the type identifiable with Torrigiani’s output, characterized by their cool and serene personality with pupils delineated by a small delicate punch and feathered wings, smoothly polished, graciously curved, and outlined by a modest bevel. The acanthi along the lower edges of the pax also correspond with those on the base of his altar service for San Giacomo Maggiore with their beautifully chiseled and channeled grooves allowing the effect of light to dance upon their surfaces.

Although the San Giacomo Maggiore altar cross and candlesticks were made four years after Guglielmo’s death, its reasonable to suggest Torrigiani was earlier employing these motifs while serving as Guglielmo’s chief assistant during the 1570s. Guglielmo’s workshop was making paxes during this late period as evinced by his 1577 inventory which cites “three silver paxes with a gilt-metal back, and one in gilt-metal.” In accordance with this description, the Pieta pax indeed features a thinly cast gilt metal reverse, separately applied, a feature distinctive of a high quality workshop whose production distinguishes it from that of provincial workshops.

Examples of the Pieta pax are particularly rare, with the present example being the only known cast identifiable as a production made in Guglielmo’s workshop. A handful of unpublished examples of slightly later facture are located. They are heavily afterworked and fall logically within the trend of serial production by later and less sophisticated workshops.

Torrigiani is best-known for the colossal bronze figures of St. Peter and St. Paul he cast for the top of the columns of Trajan and Marcus Aurelius in Rome between 1585-87.

For a complete essay with references see: renbronze.com/2017/07/16/a-renowned-pieta-by-jacob-cornelis-cobaert/