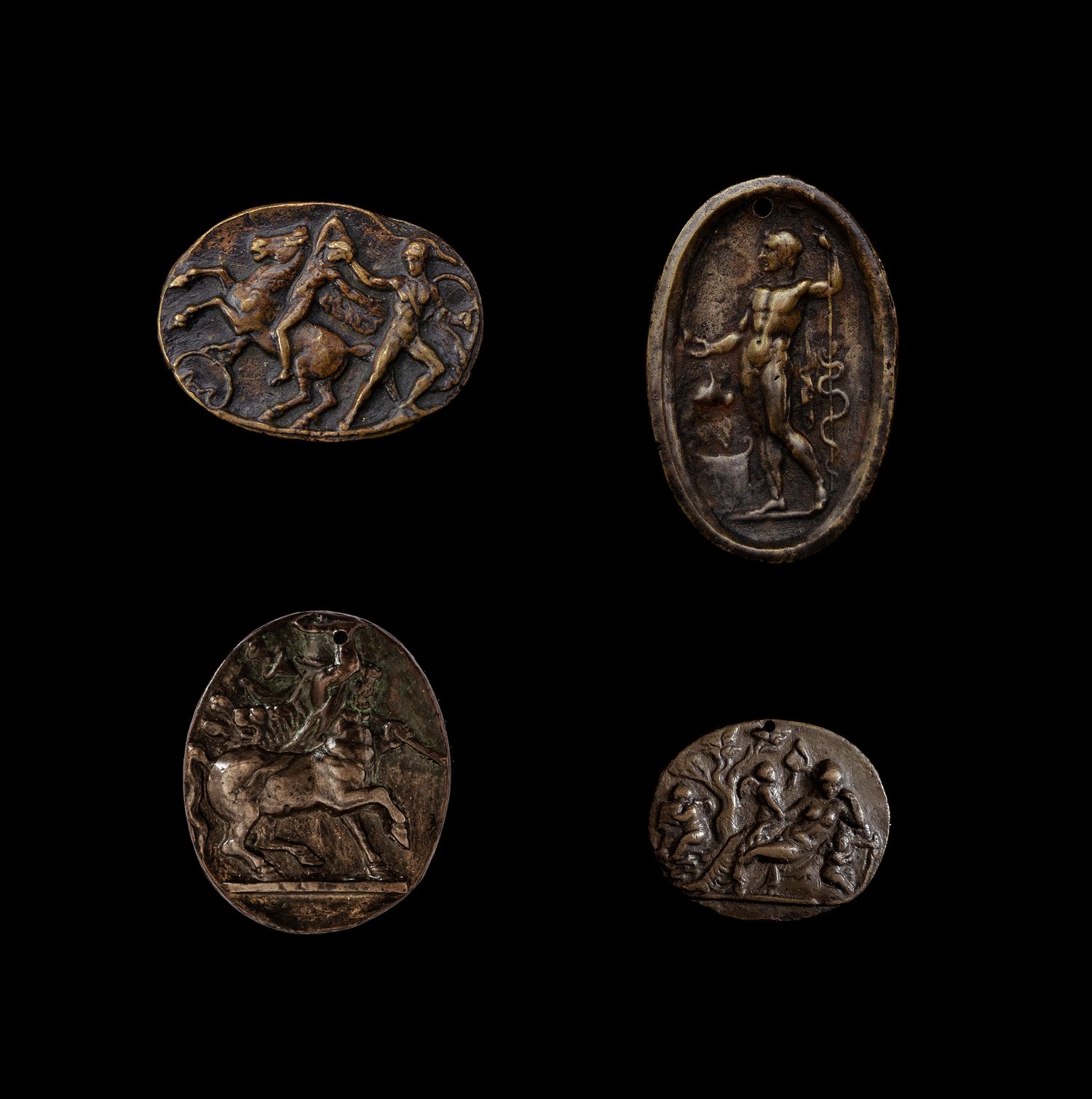 Inspired by a fascination with ancient glyptics, the revival of the Classical world in Renaissance Italy resulted in the preservation and dissemination of treasured carved gems in the noble medium of bronze.

In Rome, Pietro Barbo (future Pope Paul II) established a foundry in his Palazzo Venezia where bronze medals and plaquettes cast after carved gems in his collection were produced and shared among other collectors and nobles. In Florence, the formal academy in the San Marco Gardens of the Palazzo Medici, operated by Donatello's former collaborator, Bertoldo di Giovanni, was established as a place where blossoming Florentine artists could thrive in the cultural activities patronized by Lorenzo de' Medici, godfather of the Renaissance. In similar fashion, bronze casts of the prized gems in the Medici collection were also cast in bronze. The facture of such objects may have been ample opportunity for Bertoldo to impart his wisdom in bronze casting to early novices like Michelangelo, Pietro Torrigiani, Adriano Fiorentino, et al.

The Achilles Overcoming Troilus gem and subsequent bronze casts may have inspired Bertoldo's masterpiece bronze of Bellerophon Taming Pegasus or could have likewise inspired the horse-tamers featured on the frieze of Dontello's San Lorenzo bronze pulpits. The motif is featured on at least one early Renaissance manuscript and also appeared on a fresco by Ansuino da Forli from the 1450s at the Church of Eremitani in Padova and as the reverse to a Renaissance medal in tribute of Cecco d’Ascoli. At least one example featured on a rectangular ground was appropriated for use as a relief for a bronze desk casket (Mario Scaglia collection). Though not as common as casts of the Centaur, to be discussed, casts of the Achilles are known in a fair number of private and public collections worldwide.

Casts of the Dionysiac Centaur were probably made in Barbo's Roman foundry. An early cast example likely served as a model, among others, for the stone tondi of the Palazzo Medici courtyard overseen by Donatello and his workshop during the 1550s. Donatello also reproduces the motif as a pectoral ornament, half-obscured, on the cape of Holofernes on his famous Judith and Holofernes bronze statue in Florence, a probable stimulus for free copies of other all’antica plaquettes produced by Donatello’s Florentine followers. Lorenzo de' Medici later owned the Centaur gem, acquiring it from Barbo's estate. Many casts of the Centaur are known in private and museum collections around the world.

Casts of the Asclepius plaquette are scarce. Only one other privately held example is known. Remaining examples are at the National Gallery of Art, Grassi Museum (possibly lost in WWII), Berlin and the Hermitage Museum. The original gem may have been in the Medici collections as the Florentine illuminator Gherardo di Giovanni di Miniato del Fora reproduced the gem on an illuminated title page of Pliny’s Natural History along with other designs after antique gems in the Medici collection. The motif appears on several other Florentine manuscripts from around the year 1490.

Casts of the Hermaphrodite Attended by Three Cupids are also quite scarce. Other known casts are in Berlin, the Museo Correr, National Gallery of Art and Museo Oliveriano in Pesaro. The original gem was formerly in the 17th century collection of Cardinal Leopoldo de' Medici, probably by descent, and is quite likely a cast of Florentine origin in Bertoldo's workshop or his ambit.

For additional details, references, images or information, as well as the illustrious provenance of these four plaquettes, please get-in-touch.