17th century gilt bronze plaquette of the Madonna and Child 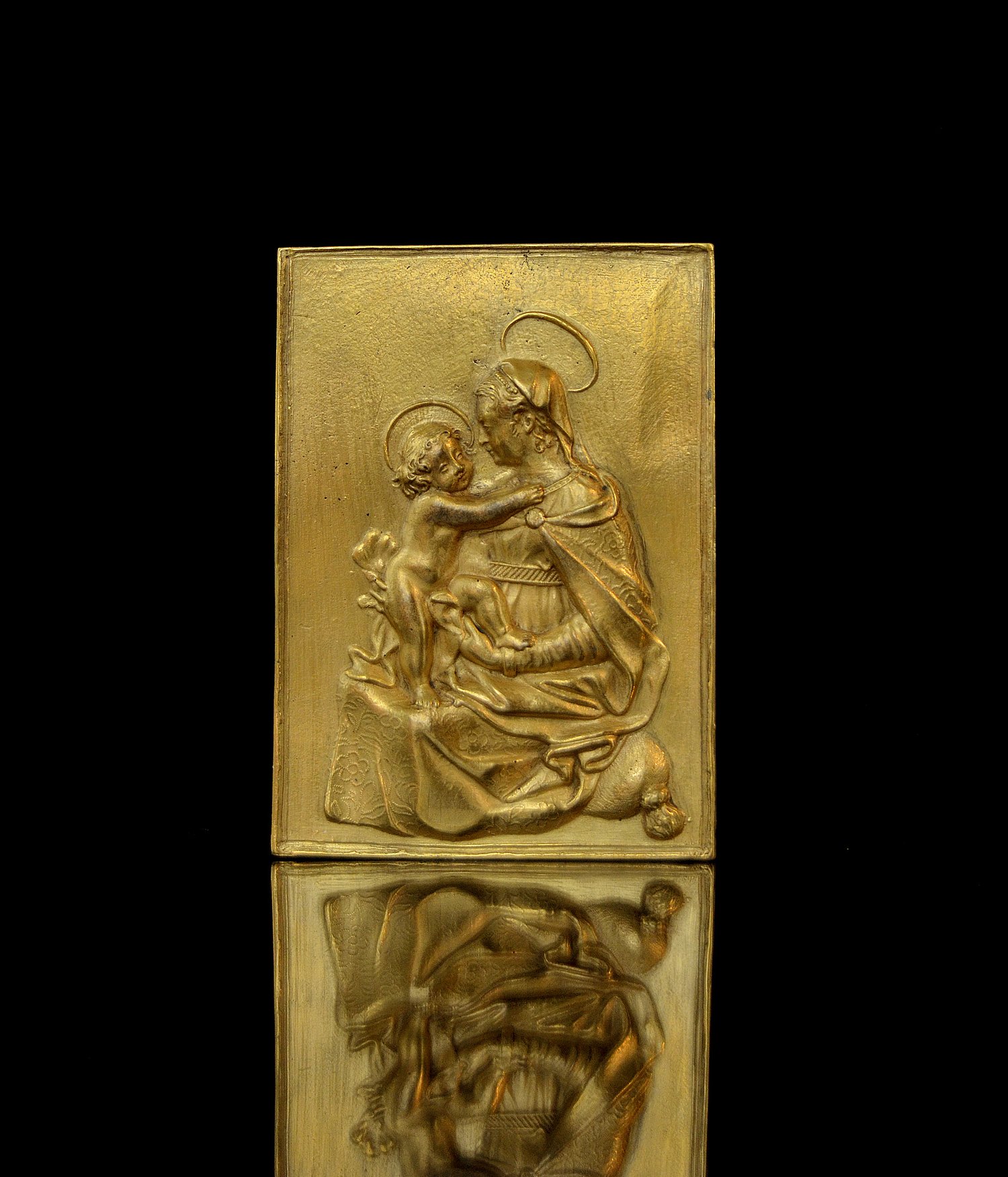 An extraordinarily fine and exquisite Gilt Bronze cast plaquette of the Madonna and Child, 17th century.

This plaquette follows after other well circulated designs of the Madonna and Child in small relief that were known in North Italy during the 16th century. Wilhelm Bode first associated an example of this plaquette with Jacopo Sansovino (1486-1570). The attribution was perhaps generically placed by Bode, as he later questions it in his revised catalog of 1922.

While assuredly not by the hand of Sansovino, the present relief certainly follows after the prototype for his celebrated depictions of the Madonna and Child such as his terracotta Madonna and Child at the Civic Museum of Vicenza. More specifically, the characteristic modelling of the Madonna's facial features beckon the style and manner of an artist operating in the circle of Giambologna (1529-1608). The Madonna's profile relates closely with the profile of Giambologna's Venus Urania (Astronomy), located at the Kunsthistorisches Museum or with the manner of putti realized by Ferdinando Tacca (1619-86). Antonio Susini (1585-1653) also comes to mind via his special attention to detailed embellishments, like the fine textured treatment found on the present plaquette.

The location and dating of other examples of this plaquette have largely been Italian, of the 16th or 17th century. Similar examples of the motif can be observed in an etching by Stefano Della Bella (1610-64), under employ of the Medici court in Florence. His etching of the Madonna and Child Embracing, is dated ca. 1641 (see an example at the MET; Inv. 17.50.17-298). An earlier source for Stefano's etching may derive from Guido Reni's (1575-1642) print of the same subject made ca. 1600-13 (see also an example at the MET; Inv. 26.70.4). Reni's earlier print is more closely related to the present relief, particularly with regard to the placement of the hands and arms of both the child Christ and Mary. The heavy, thick drapery and placement of the halos likewise relate. Though one of his less influential prints, Reni's etchings served as models for a variety of successful artists during the height of the Italian baroque era. A similar etching is also reproduced in a painting by Antonio de Pereda (of Wilhem von Aquitanien), dated 1671 at the Academia de Bellas Artes in Madrid. These reproductions give strong suggestion for a 17th century dating for the plaquette.

While most examples have been assumed to have an Italian origin, the presence of the relief (and variants) throughout Northern Europe could suggest the crossover of Italian influences into France and beyond (school of Fontainebleau?), making it a work of Italian influence, executed in the North.

Numerous later and reworked lead examples of the relief are known throughout Spain (many add the inscription JESUS . MARIA). They derive probably from a fine earlier modified example of the relief altering the halos and adding stars overlying Mary's drapery, as reproduced on a superb pax now belonging to the Museo Provincial de Lugo.

Several versions of the plaquette exist in different states. Some silhouetted, others ovular or in rectangular format. The present example is the finest version known. A pressed tortoise shell example (private art market) reproduces the same quality as our example offered here. All other examples appear debased in quality.

The widespread success of this relief is evident by examples of it in other esteemed private collections (Molthein, Rho, Cicognani, Ubertazzi and Convert collections). Several examples are in German Museums (two in Berlin, one in the Grassimuseum). The plaquette is also interestingly reproduced as a 17th century lead glazed baptismal fount (ex Michele et Claude Lemaitre collection).