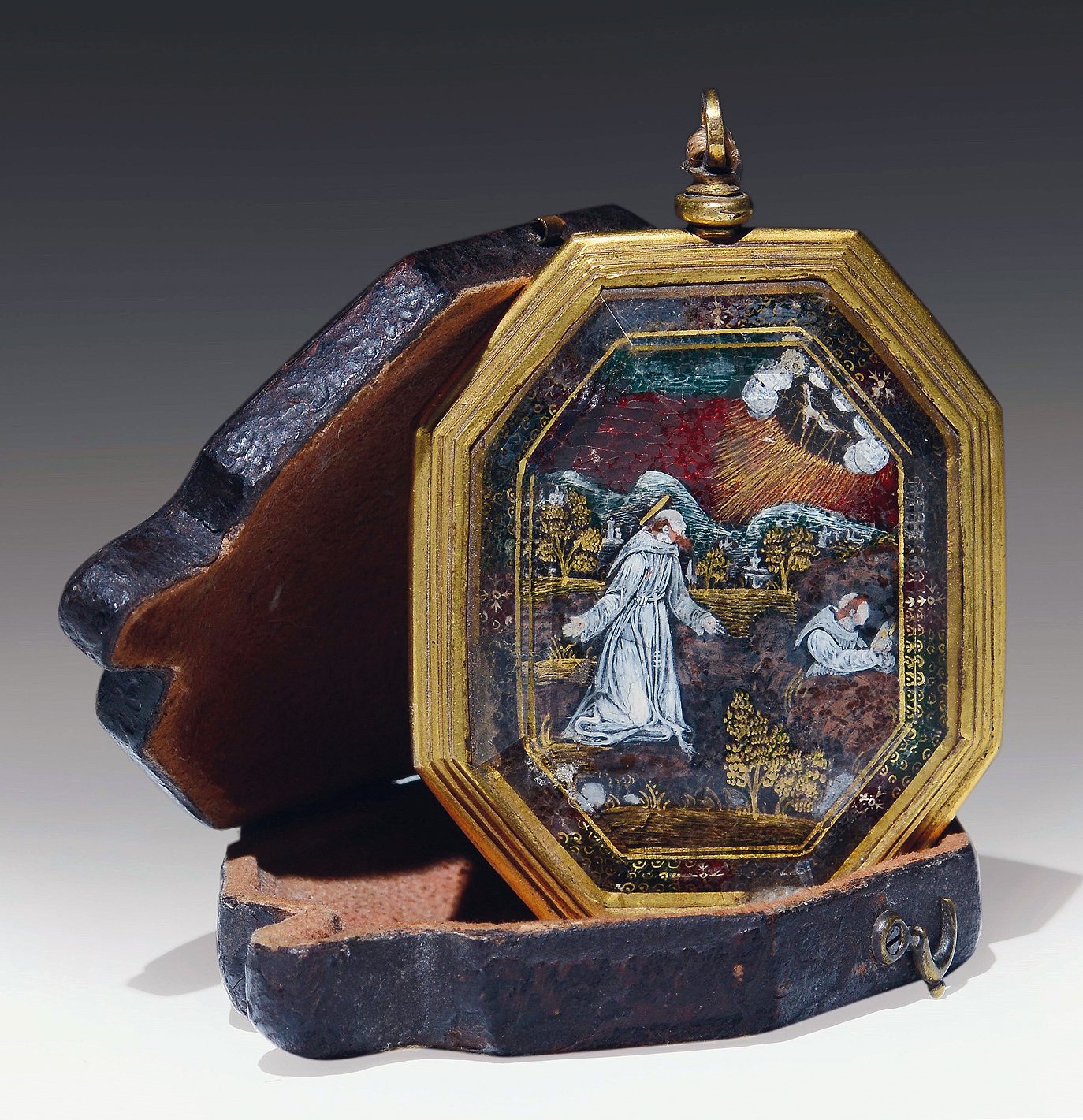 The present miniature reverse painted and gilt rock crystal devotional pendant depicting St. Francis and St. Claire of Assisi may stylistically be attributed to the miniaturist Giovanni Giacomo da Decio, the Sforza court miniaturist whose work was commissioned by Francesco II Sforza, Duke of Milan. His miniatures survive in various locations like the Cathedral of Vigevano or in an Ambrosian Missal of Girolamo Mattia, provost of Santa Maria della Scala, now in the Pierpont Morgan Library collections.

Giovanni’s son, Agostino, was praised by his contemporaries for his skill as a miniaturist and Giovanni’s father was a specialist in cut gems and cut rock crystals. Conforming to the cross-pollination of specialist trades of Milan during the early 16th century, Giovanni is thought to have worked in other mediums such as painted crystals, of which, only a scarce handful are known, such as the present example. He is also known to have worked in enamel, of which one fragmentary example survives on a pax at the Louvre and several are featured along the base of a chalice at Castello Sforzesco in Milan.

The present miniature is set within its original gilt bronze pendant frame with a contemporary or slightly later shaped leather case.

Reverse painted and gilt compositions on rock crystal comprise a highly technical virtuosity in which gold gilding was first applied to the interior of a polished crystal surface followed by painted tones in tempera or oil and sequentially rendered in a reverse process that first applied lighter colors followed by dark colors. Great vision and skill were required of the artists responsible for these fine miniatures whose tradecraft was centralized in Milan, a derivative of the talented illuminators who gathered under the court of the Sforza family during the end of the 15th century.

The present example is in a remarkably preserved state. Examples without losses to the composition or damages to the paint (often due to exposure or moisture) are rare. The condition may be partly due to its (possibly original) shaped leather case intended for storage.

Traveling monks and nuns, or significantly devout (wealthy) citizens were the most likely to own such pendants, carrying them with them on their sojourns. In many ways, these special objects were connected with the goldsmiths trade, with miniaturists in Milan exerting a notable influence over the models and manner of active goldsmiths.

Condition: An exceptional example of reverse glass painting in miniature. Survivals in this condition are scarce and the medium itself is quite rare. Some minor chipping on the crystal and minor losses to paint commensurate with age.