16th century stucco cast of the Deposition by Alessandro Vittoria 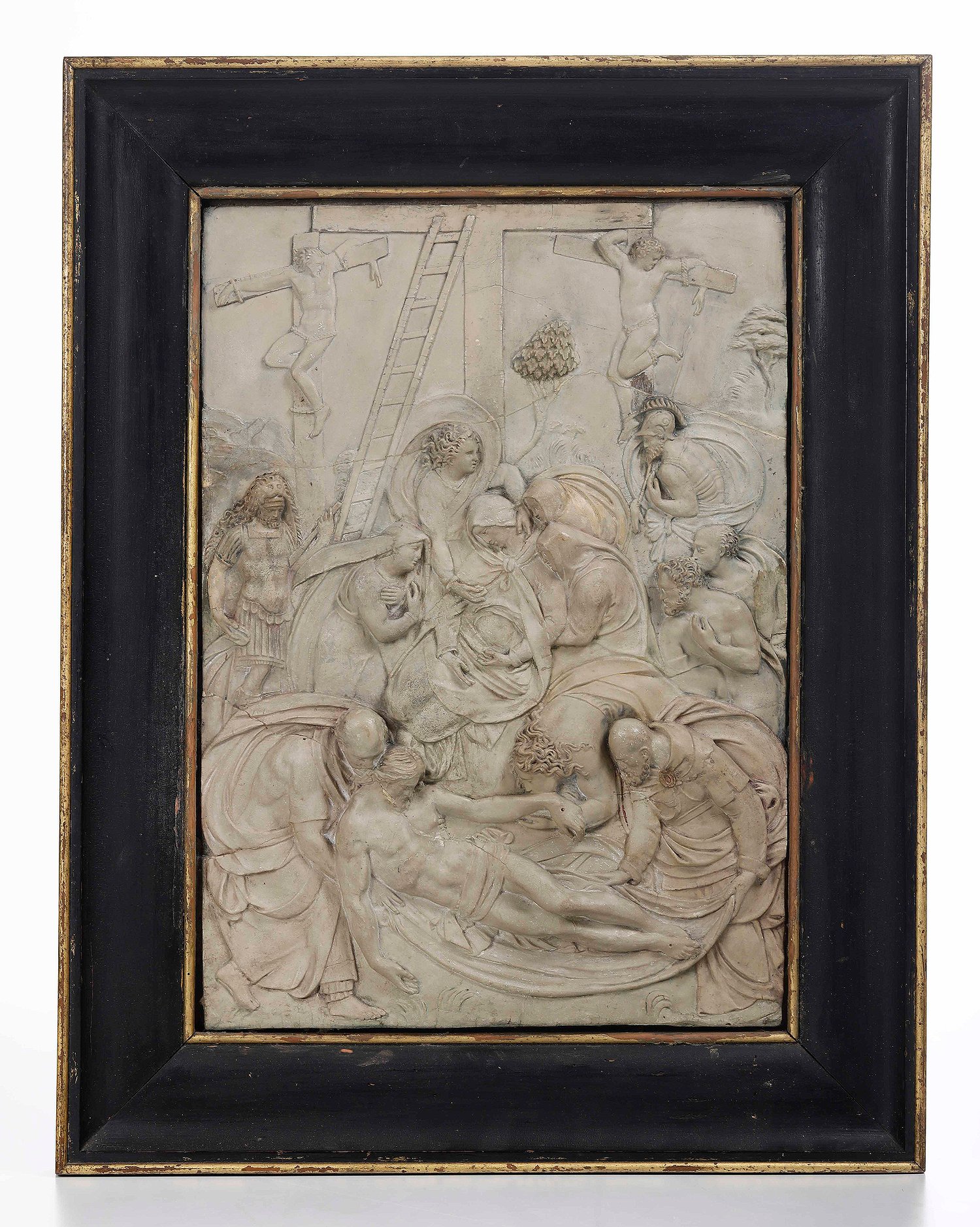 This relief of the Deposition, known by examples in bronze, terracotta, wax, cartepesta and stucco casts, is most often attributed to the Roman sculptor Guglielmo della Porta, chiefly on account of its relationship to compositions in his sketchbook at Dusseldorf. However, the modeling and overall revolving current of smoothly formed draperies in this relief, and the treatment of the facial features of its protagonists, is unrelated to Guglielmo’s other works which showcase a more traditional form, elaborate level of detail, vibrant drapery and a nervous vitality more commonly encountered in reliefs like his Mount Calvary in Budapest (Inv. 51) and his wax Crucifixion at the Galleria Borghese in Rome.

Rather, this Deposition has more in common with the visual language of another sculptor of the era, Alessandro Vittoria, whose Mannerist expressiveness and Venetian classical style are imbued in the content of the present relief, as theorized recently by Charles Avery (see C. Avery (2016): Joseph de Levis & Company, no. 45, p. 135).

An immediate analogy can be drawn against a relief of the Feast of the Gods attributed to Vittoria, ca. 1571-78, known by several bronze casts like those at the MET and Cleveland Museum of Art. The compositional approach of the two reliefs are alike in their feature of classicized faces, high relief-work, gyrating forms and overall shared essence.

Vittoria is heralded as one of the finest sculptors of late 16th century Venice. He was trained under Jacopo Sansovino and was adept in mediums of terracotta, marble and bronze, commensurate also with the various mediums in which we know surviving examples of this Deposition. A marble example of this relief at the Castello Sforzesco in Milan could be the prototype from which the cast versions in various materials derive.

Set in an antique Italian frame commensurate with other contemporary examples like a fine gilt stucco one formerly with Fabrizio Moretti (Sotheby’s sale, 29 January 2015, lot 138). Our example is in a condition commensurate with its age, inclusive of some stress cracks, expertly repaired.