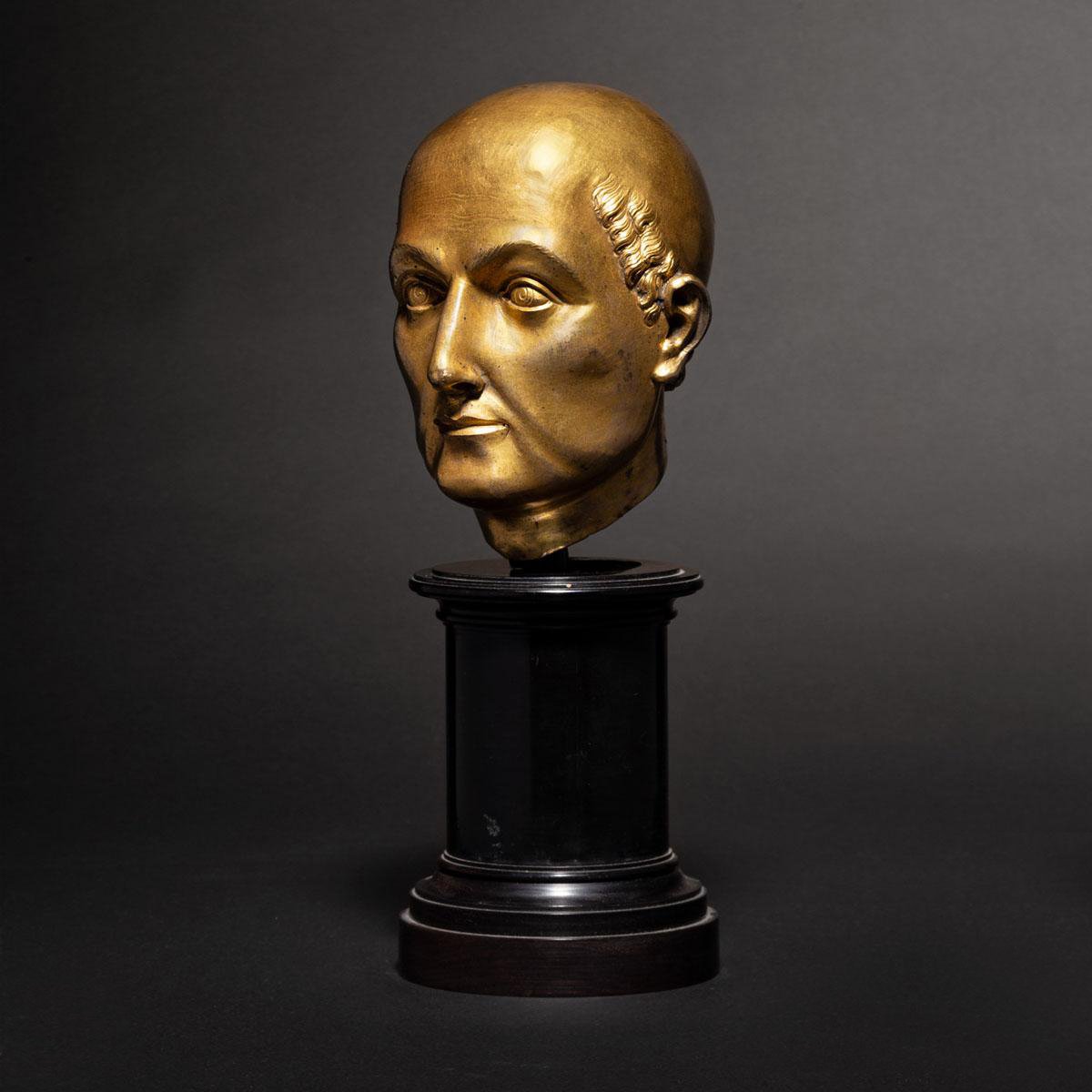 A Florentine gilt bronze Bust of a Saint

The present gilt bronze bust of a saint falls into the stylistic milieu of sculpture connected with Baccio Bandinelli, the most prominent sculptor active in early-to-mid 16th century Florence apart from Michelangelo. For example, his marble Hercules and Cacus was originally commissioned by the Florentine council as a pendant to Michelangelo’s masterpiece, David.

The present sculpture is imbued with Bandinelli’s ambition toward ideal beauty and the pursuit of perfection. Although small-in-scale, its persevering expression alters its emotive character when perceived at varying angles, at times intense, at others times reflective and signaling an amiable charm.

The present bust may have once been set into a separate base, probably in the form of a cope or saint’s robe and intended for private devotion as a reliquary bust.

The modeling of the saint’s face closely compares with the stylistic tendencies of Bandinelli. For example, the smooth surface features of the face, elegantly arched brow lines, Romanesque nose and sharply chiseled lips inspired by classical forms are commensurate. In particular, the depth and shape of the orbitals rendered with eloquent depth and with slightly protruding convex spheres for the eyes delineated also by sharply incised lids and tear-ducts recalls also the precision of handling observed on his other bronze and marble busts. The grouped tufts of hair, textured by equidistant lateral striations which terminate in tightly coiled curls approaching the flesh, is especially evident in Bandinelli’s other works.

In comparison with his works in stone, our Bust of a Saint shares a likeness with a larger monumental marble Bust of a Young Man in Berlin, attributed to Bandinelli, from around the year 1540 (Inv. 2/2008). The classicized features and pensive gaze observed in each work is compelling.

Especially comparable to the Bust of a Saint are two bronze busts Bandinelli made in slightly smaller scale of Cosimo I de’ Medici and his wife Eleanor of Toledo. A comparable simplicity is observed between these bronzes and that of our saint, approaching what Volker Krahn described of Bandinelli as, “a less representative language.” In particular, for the conception of a devotional bust there is a clarity of form, almost mechanical, and decidedly less pronounced, that echoes earlier examples of cinquecento Florentine reliquary busts.

While the facial modeling and chasing of the hair recall Bandinelli’s large bronze bust of Cosimo at the Uffizi (Inv. 1911/671) the subdued character of our much smaller saint finds more commonality with the smaller busts of Cosimo and Eleanor, especially the later whose outward-looking stare is contemplative and defined by commensurate sharply chiseled features, inclusive of her brows demarcated by a symmetrical series of blunt chase marks running along the ridge of the brow line. Such characteristic treatment may suggest the bronze founder, Teodoro da Ravenna, may have been involved in the casting of our saint as he was responsible for the small busts of Cosimo and Eleanor, documented cast by him, on behalf of Bandinelli, between July and December of 1544. In January 1545 Cosimo’s butler, Pier Francesco Riccio, requested the ducal secretary, Cristiano Pagni, to remit payment to Teodoro for the casting of those two busts, as well as a bronze Satyr by Bandinelli. Cosimo provided payment to Teodoro and also issued the order to set the price for future casts by that founder.

Bandinelli was especially active with bronze between 1544-45, a period in which he made the aforenoted bronzes as well as a figure of Cleopatra for Cosimo. A document from 1545 also mentions payment from the Opera Di Santa Maria Del Fiore (Florence Cathedral) for the casting of small bronzes, of which we may wonder if our present bust could have been one such work. Documents note Bandinelli’s provision of wax models (for casting objects in bronze) produced that same year for the Cathedral. In 1549 documents also mention Bandinelli’s creation of a small bronze Hercules (all of these later works reside at the Museo Nazionale del Bargello).

There are two parallel-aligned circular plugs (about 1.5” apart) sealing where the casting sprues were originally attached along the back-of-the-head. Trace remnants of iron core pins remain inside the head. One was removed, and left unplugged, located behind the proper left ear. Another, in front of the ear, was trimmed and was perhaps formerly covered but oxidization has exposed its location and the gilding is lost there. There is an unusual discoloring of the gilding running along the crown of the head, perhaps suggesting where something was once set atop the bust’s head or perhaps at one time resealed if intended as an open cavity within which to set the reliquary. The hair along the reverse of the bust is less finished, showing the original tool marks of the wax model. The raw tufts of hair here suggest how the other tufts may have similarly appeared before the application of cold-work which is extensive on this bronze, bringing it to a masterly level of refinement. The handling of the punch tool is remarkably controlled, etching subtle lines where the hair terminates into the bald head of the saint and where the eyebrows are delineated by a series of carefully hammered lines moving along the ridge of the brow line. The orbs of the eyes are also delicately hammered with exception of the iris, providing a distinctive texture that enhances the hypnotic chased spiraling pupils. Such subtle details indicate the bust may have been observed up-close. Certainly, its maker had an infatuation with perfection, symmetry and balance…even down to the quantity of chased lines used to delineate each eyebrow (approximately 14 or 15 strokes each).