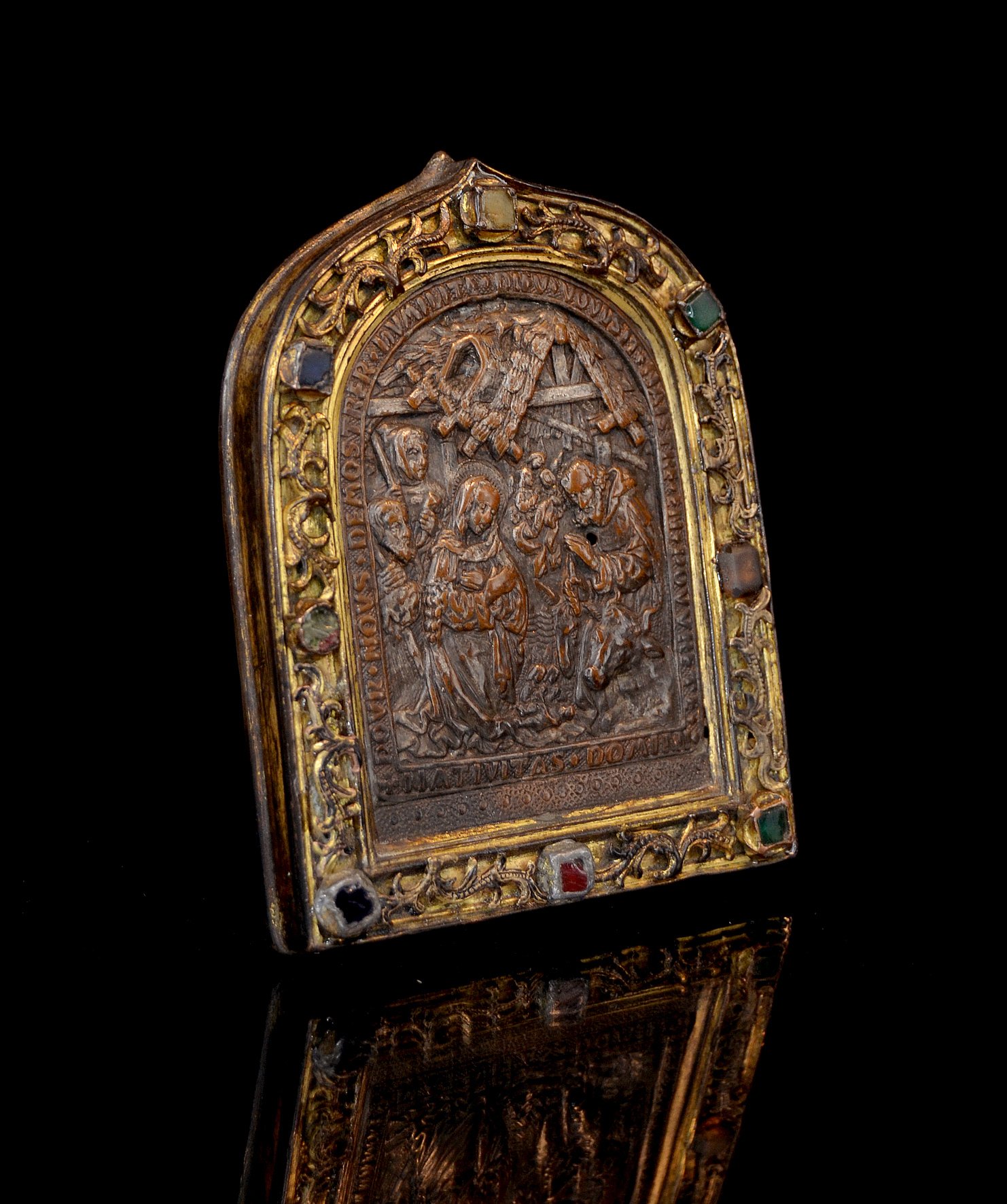 The present pax features a small plaquette relief of the Nativity, known by several independent examples (National Gallery of Art, Victoria & Albert Museum, et al). Our object is the only example in which this plaquette survives in its original intended context, for setting into a pax frame.

The present bronze relief was once silvered (with some traces still remaining). The design of the relief may have been inspired by a painted miniature illumination of the subject, considering the close ambit of illuminators with goldsmiths of the period. The Nativity scene also recalls later woodcut designs found in French Book of Hours datable to the last decade of the 15th century. An inscription navigates the border of the design: NATIVITAS DOMINI POVR NOVS DEMOSTRER HUMILITATE DIEV VOVLSIT NAISTRE EN POVVRETE.

The pax is adequately datable to the 1460s-70s. Another pax at the Musee de Cluny (Inv. Cl.9188) probably comes from the same workshop, featuring a frame and handle closely following our pax. It likewise features an engraved gothic inscription on its reverse with the date, 1468.

The inscription on our pax probably refers to its original owner: Frater Julien Guillou.

Condition: Contemporary cast silvered bronze plaquette and gilt copper pax frame and handle with filigree appliques and rhinestones. Heavy losses to the original silvering of the plaquette, originally tarnished black but revitalized through careful cleaning. Minor losses to the gilding throughout, the reverse especially rubbed due to handling and wear. A hole on the relief beneath Joseph’s chin due to a possible casting flaw. The owner’s name handsomely inscribed in gothic characters on the reverse: . f . julien . goilluo . Old repairs present on the bottom left and center rhinestones which feature re-created mounts in pewter whose gilding has not properly adhered to the metal and is thus almost entirely lost. Two former pewter filigree replacements have been removed by the present owner with new restorations. The lower left filigree was used to cast three filigree replacements in brass to correct the earlier replacements of inadequate quality whose gilding was lost and quality lackluster. The master filigree used for casting these replacements was broken while removing it from the mold but has been corrected and glued with a jeweler’s apoxy. The same apoxy was used to mount a new synthetic stone in an area where one was lost along the center right of the frame. This stone was painted black on its underside with part of the coating distressed through scraping to allow some light to show through the stone. The stone was sanded to dull its appearance and was applied to form a sense of congruence with the remainder of the object even though it lacks a mount. A loose sprue from one of the earlier replacements is floating within the interior of the pax which one can hear when rotating the pax in-hand.